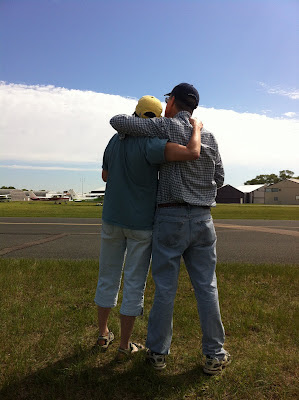 Just 11 days shy of the wedding anniversary for which it's numbered, N614EF became an airplane today when it flew under the tutelage of test pilot Tom Berge. June 14, 1942 was my parents' -- Eileen and Fred -- wedding date and this year would be the 70th anniversary. There's very little about this plane that doesn't incorporate almost everyone I know. Even a piece of carpet in the workshop was made by my grandmother, who died in 1986, years before I even contemplated the project. And, as you probably know, the signatures of people who helped or inspired dot the innards of the plane.

Before my Dad died, our few phone conversations always ended with, "you be careful in that thing." And I recalled that last week when I finally decided that the first flight should be done by the best pilot I could find, not only for the safety of whomever is flying the plane, but for the people in the houses surrounding this city airport.

I didn't miss out on anything. Standing next to my wife of (nearly) 30 years to watch the plane we built while our kids grew was about as good as it gets.

When I started this project 11 years ago, I wanted to end up with two things: (1) An airplane and (2) The same person next to me who was next to me when we started. By the way, that's not in order. What I got out of it that I didn't anticipate was a great number of friends I met along the way, managing to keep most of them.

When I reached Airlake Airport some time after Tom touched down, he stuck out his hand and said, "Congratulations, you have a nice airplane."

The only major items were a heavy left wing -- which is normal and can be fixed relatively easily, and a balky left brake, which I'd already expected.

There are many people to thank for this, which is why I'm not going to attempt to do it now.

I still have some transition training to do before I fly it, but that'll happen within the next few weeks, maybe on June 14th.

Meanwhile, today was a big day. My son, Patrick, turned 24.