A year or so ago at this time, there wasn't much chance I'd ever fly to Oshkosh as pilot-in-command. My well-documented medical woes seemed to preclude much flying at all.

But I got my medical back in mid-June and after some refresher training, I was ready to go.

These two guys -- sons Sean and Patrick -- were there when the first parts of the plane arrived in 2001. Their signatures (I made everyone sign a part they worked on ) are all over the innards of N614EF.b 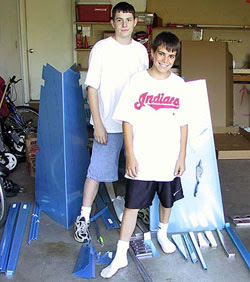 So last Thursday, my youngest son, Patrick, and I set out in the RV-7A from South St. Paul. 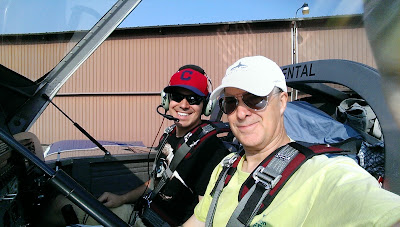 It was a hazy flight, thanks to the fires in the Pacific Northwest, and there were plenty of clouds. We went on top. But about 20 miles from Black River Falls, it looked like things were thickening. 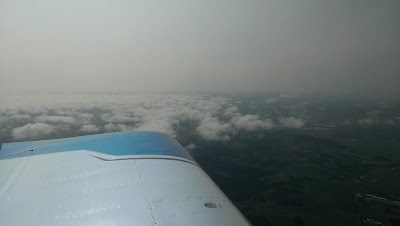 Winona is an old-time airport that has seen its best days. We bought some fuel at a ridiculous price since the plane was aft loaded with camping gear and this would prevent me from having to buy fuel at Oshkosh, which -- as it turns out -- was a good 40 cents a gallon cheaper than Winona. 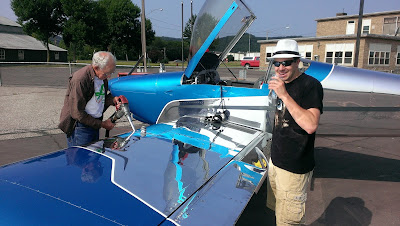 "Sorry I'm not more hospitable," the owner of the FBO said as we walked in while his helper took 20 minutes to process the credit card purchase, "but I'm beat." Selling $60 worth of fuel can take a lot out of you in Winona. 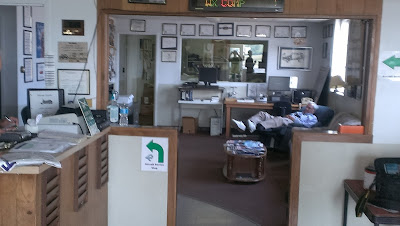 I called flight service and found that, indeed, things were thick in central Wisconsin (this is bog country) but a single PIREP gave me hope when it reported that the clouds "were breaking up nicely" over Wautoma, not too far from the Fisk approach. So we launched.

The arrival was OK, not great. We slipped in behind a Cherokee that couldn't do the 90 knots required and when we got close enough to get caught in his prop wash, we decided to bag the approach. Turning back toward Green Lake, though, we spied a long line of planes coming from all directions. My expletives probably didn't make Patrick any more comfortable.


We eventually found a place to slip in and ran the approach again. We were assigned 36R and it seemed we got the one controller working his first Oshkosh. He was well behind things and struggling to catch up. He didn't make it.

A plane decided to pass us on base and proceeded to turn final just ahead of us -- thanks, pal. Great airmanship! -- and while I expected a controller to notice, he didn't. He was concerned about an amphib above us heading to 36L while I was turning base for 36R, the taxiway that becomes a runway during AirVenture.

"RV on final for 36R," I announced, because it was clear the controller wasn't going to give me clearance to land because he'd stopped paying any attention to us, if he'd ever started.

A few minutes later, we were tied down in homebuilt camping. 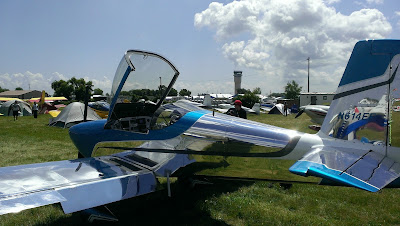 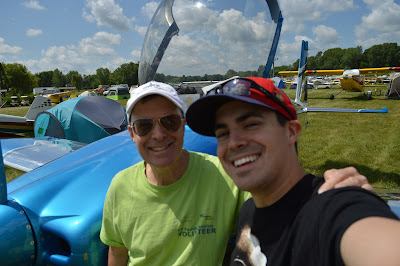 We did the usual Oshkosh things.

We checked in with Jerry. 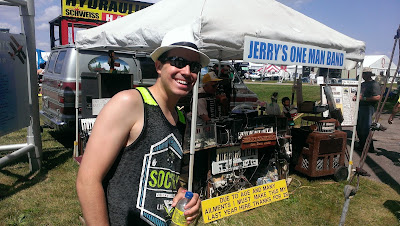 And stopped by to see Bernie Ockuly and the Metro Warbirds crew. 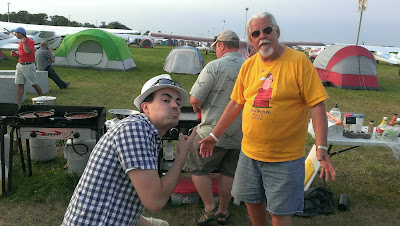 And watched the airshows, of course. 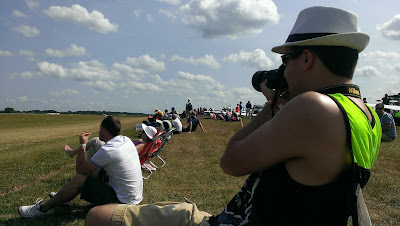 I, of course, checked out the various polished aircraft on the field. They were beautiful. 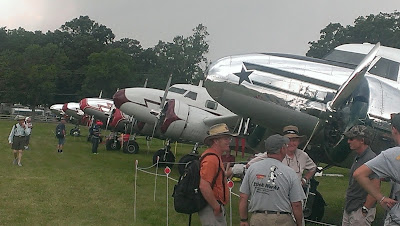 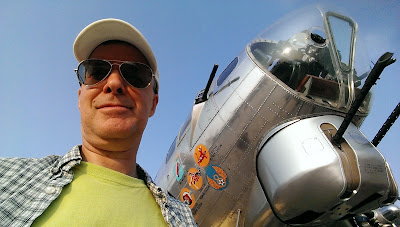 I liked mine better. 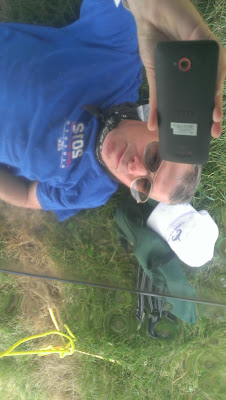 We had a great time one evening sitting with the EAA Radio folks. And on our last evening I did a quick interview about getting my medical back. "I could tell this story by now," my exasperated son said. He'd heard me tell the story dozens of times to people who stopped by the plane. But they asked. 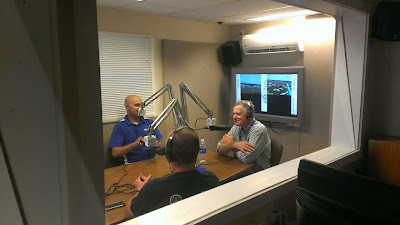 But Patrick had to work Friday night, so on Friday morning we left the tent and tie-downs behind, and headed home. See you later, Oshkosh. 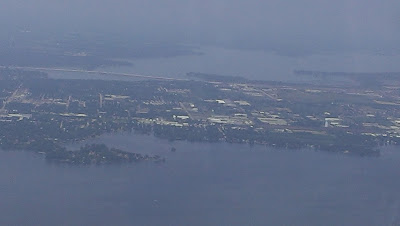 We were about 25 miles out of Oshkosh when I pulled my cellphone out to see if I could detect weather on the Garmin Pilot app (I couldn't). "Oh, (**&@@*&^, " Patrick said. "I left my cellphone charging outside the showers."

Nothing we could do but set a course for Green Lake and fly the Fisk approach again to get it. Patrick flew it and flew it expertly and it worked out well because we got on-the-ball controllers all the way down. We again got 36R assigned for us, which required the jets landing on 36L underneath us to throw on some smoke so we could see them. No big deal.

I taxied back to HBC and kept the engine running while Patrick went to get his phone. He hopped back in and we departed again for home without incident.

"Nice paint job," the controller said as he cleared us to depart on 36.

But we'd used so much fuel that by the time I landed in South St. Paul, well, let's just say it didn't take much to keep the nosewheel off the ground while rolling out.

We filled up the gas tanks and pushed it back into the hangar... 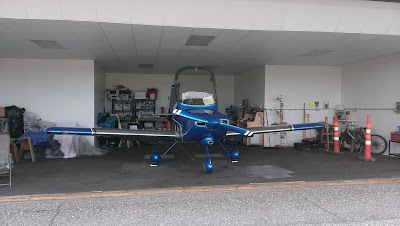 ... because the next morning, my oldest son, Sean, and I set out for Oshkosh. 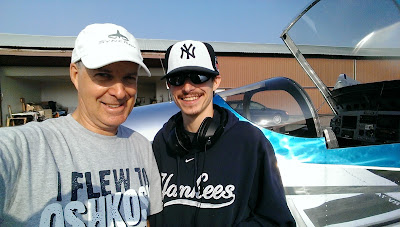 We had a great Fisk arrival -- our third -- and an hour and 47 minutes after we started the engine in South St. Paul, we stopped it in Oshkosh. 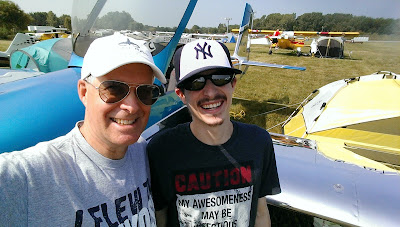 Sean primarily wanted to see the night airshow, but we had some time to walk around.

To visit Jerry, for example. 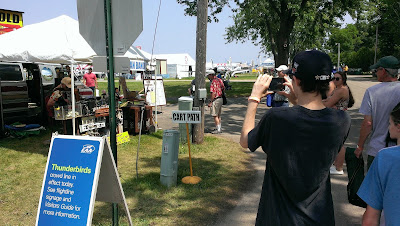 And Sean found the perfect spot to get some shut-eye from the early morning start. 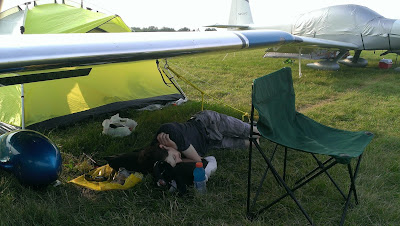 Sean always liked it when they blow stuff up, so the night airshow was perfect. 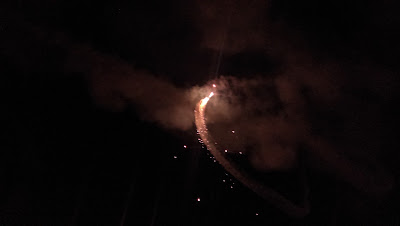 Sunrise in Oshkosh on Sunday. Time to go. 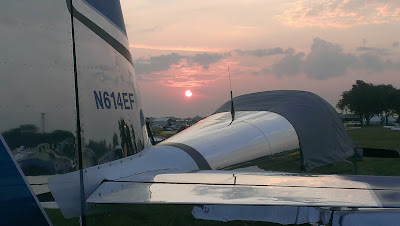 We were ready for engine start at 9 a.m. "Got your cellphone?" I asked Sean. He did. We were in the air after about 15 minutes. 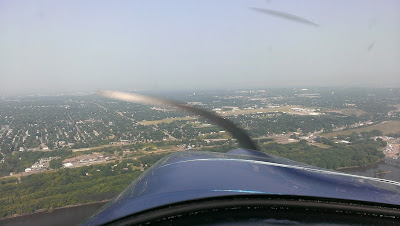 There were lots of people I didn't see. Lots of things I didn't do. But I accomplished the one thing I wanted to do: Take two boys who were there from the start, to the place to where we always wanted to fly.