The disappointing customer service of Artex

I've opined on various spots over the years that American business would be a lot better off if it stopped blaming its problems on everything but themselves, and got back into the game of customer service. Sure, we all shop for things based on price, but nothing can keep a customer from coming back like crappy customer service.

Ladies and gentlemen: I give you Artex.

I bought a 406 ELT from Aircraft Spruce (oh yeah, I also give you Aircraft Spruce) several years ago, and then didn't install it in the plane project until a year or so ago, after its warranty had expired.

I decided to put the antenna outside the aircraft rather than hide it behind the rollbar because (a) I actually like the look of antenna arrays (I think it's from being in the radio business and (b) Aircraft Spruce's catalog item insisted the antenna would withstand a 200 knot breeze.

A new antenna, Aircraft Spruce told me, would be $226, so I took the advice of people on Van's Air Force and contacted both companies to see if they have any shame about selling a substandard piece of equipment, and any interest in customer service.

"Scott," who identified himself as a manager at Artex, called me right away after receiving my letter and story and he couldn't have been nicer. "That shouldn't have happened," he said. "We'll send you a new one tomorrow." He said the model I had was an old one and there had been an improvement and a revision. I got the sense that the company realized they were selling units that didn't confirm the performance claims.

And that was the last I heard from Scott. No antenna ever showed up and this week I called for the third time and left a voicemail message, and for a third time, the call was not returned.

It's a most curious situation, indeed.

In the meantime, my RV-7A is sitting on the ground with a hole in the top skin. It's not going flying without a functioning ELT; it can't.

In the end, I'll have to spring for a $226 antenna, to replace the one that couldn't survive 30 hours of flight time. I should probably move the antenna to behind the rollbar, but, frankly, I don't want to rewire the plane at this point, I question the performance of an antenna in that position and, besides, I want the products I buy to perform as advertised. I want manufacturers and resellers to value the amount of money I've spent (not only on this, but on all the other stuff I've purchased for this plane) enough -- I want them to value their customers enough -- to make me satisfied. I'll spend more money with a company like that.

Or, you companies can just bitch about how the world is against you and your business is declining through no fault of your own.
Posted by Bob Collins at 8:04 AM 7 comments:

Just when I was starting to think my 11-year project was something special, along comes the story about Ed Kusmirek of Renton, Washington. 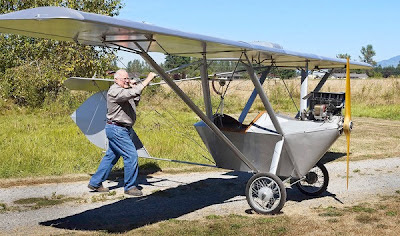 He's built a replica of the Dormoy Bathtub:


In the 1950s, he bought the authentic engine he needed for $40, caked in red Oklahoma dirt. Dismantling and restoring that was the beginning.

In the last seven years, he made the airframe himself, using many repurposed bits and pieces. The wheels came from a dirt bike. The tension wires inside the wings are spokes from a bicycle.

"The Wright brothers used a lot of bicycle parts," Kusmirek said. "I figured there's no reason I couldn't take advantage."

Showing off the finished airplane parked in an open hangar at Enumclaw Airport in Enumclaw, Wash., Kusmirek pointed to other unusual parts.

The story is in the Los Angeles Times.
Posted by Bob Collins at 7:14 AM No comments:

I met Ernie Butcher, featured in the film, at Oshkosh this year. He camped next to us. He introduced himself and told me I was an inspiration to him. That was humbling, to say the least, because he sure did a lot with it.
Posted by Bob Collins at 8:10 AM No comments:

Yet another Oshkosh video

Up here in Flyover Country, we're getting ready for the approaching winter. We're raking leaves, canning some preserves, changing the belt on the snowblower, and -- of course -- laying up a stock of good Oshkosh videos.

Posted by Bob Collins at 9:10 AM No comments:

Every year, it seems, there's one home-made video that captures what Oshkosh means to people.

Posted by Bob Collins at 9:38 AM No comments:

One of the highlights for me at Oshkosh this year was seeing my friend, Bernie Ockuly, and introducing him to my wife, Carolie, and having her get a close up look at Bernie's famouse RV-7. 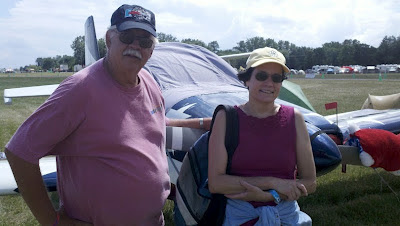 And here it is in action, flown by Bernie's son, Chase, at HogVenture 2012 in Illinois. That's right, people, actually footage of an RV-7A on grass.

A visit to bluff country

I'd always heard about Rushford's little airport in the southeast corner of Minnesota, and have wanted to visit there. But up until recently, I didn't have an airplane with which to do it. Now, of course, I do so it was next up on the list of places to visit (after Madeline Island) while continuing to make adjustments to N614EF (I'm installing and bonding leg fairings at the moment).

So yesterday, MPR colleague Elizabeth Stawicki and I headed out in search of the little airport that sits on the top of a bluff. This is bluff country, where the small cities sit down in the canyon. From the air, it's not hard at all to see why a flash flood five years ago last month killed about a dozen (if I recall correctly) in the cities below.

The good news came right off the bat. Requesting flight following, Minneapolis Departure reported they could, indeed, see my Mode C transmission, and the transponder was reporting the correct altitude. That's quite a relief as the trip to Madeline Island, you may recall, featured an inoperative Mode C. The Garmin 327 automatically switches to ALT on a runway roll, but I've taken to manually recycling it during the runup to see if that changes things, and perhaps it did.

The down side, so far, is that I don't have -- and don't want -- a VOR receiver since VOR stations are being phased out and I navigate by charts and GPS. In many locations, you transmit to Flight Service on a particular frequency and listen back on a VOR frequency. That's antiquated. So I couldn't use the frequencies Departure gave me to open my flight plan and they said they couldn't do it, even though they have in the past. Whatever, we did without the flight plan since we were in communication with ATC via flight following anyway, with the exception of a 10 mile patch north of Rochester where Minneapolis Center -- at least on the frequency we were given -- can't pick us up and we can't hear them.

Eventually we got some scratchy and intermittent communication which was not understandable, but I indicated we couldn't receive and we'd try again in a few minutes.

A few minutes later, Center called us asking us how we were reading. Good service, right there.

There was no traffic to report but it's always nice knowing someone's keeping an eye out for us. Center cut us loose about 12 miles north of Rushford when they lost radar contact but, no matter, there was no traffic out yesterday and the runway was ahead of us.

An upwind entry and a pattern approach put us on Runway 16 with a slight left crosswind, but the RV-7A doesn't care too much about crosswinds and we landed fine and taxied back up to the little prefab house that constitutes the terminal.

And what a great spot it is. There's a spacious living room... 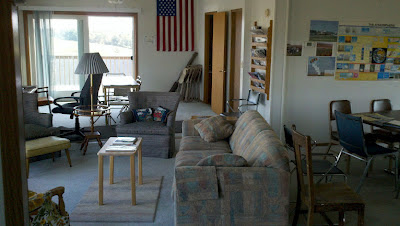 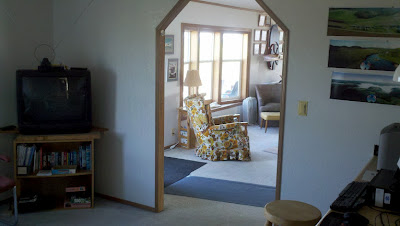 But the big payoff was the fully stocked kitchen. 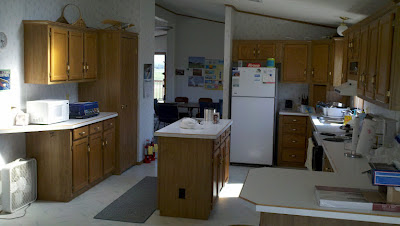 There was plenty of frozen burgers and buns in the freezer if we wanted to use the grills -- we didn't -- but there was also ice cream in there and tons of root beer for making root beer floats. Just leave the 50 cents in the can. Want to drive into town? The keys to the courtesy car are on top of the fridge.

But the day was gorgeous, why drive anywhere, what with a beautiful view, a huge deck, the ear-splitting quiet, and a root beer float to consume while watching tons of hummingbirds show off their crosswind technique? 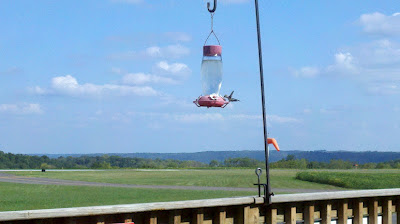 Nearby, there's a farm. Soybeans are planted right up to the runway.

And best of all: Avgas is "only" $5.25 a gallon -- certainly the cheapest I've seen around lately. So we filled up. 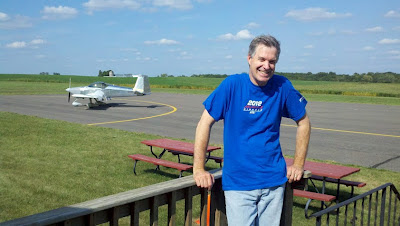 Rushford is home base, by the way, for Steve Russell, who flies his powered parachute around these parts and provides some of the gorgeous videos, which I occasionally feature on the day job -- writing NewsCut for Minnesota Public Radio.

Elizabeth bought me a Rushford Aviation T-shirt -- $20, just put it in the can with the rest of the honor money -- which I'll wear with great affection for a great spot.