It was pee-in-a-cup night for N614EF as the flight test period continues.

Although the plane performed much better once we removed crud from the #1 cylinder injector on Sunday, the exhaust gas temperature and the cylinder head temperature for the cylinder were higher than for other cylinders, indicating that perhaps the mixture was a little leaner in that cylinder than it should be.

So today I took the injection line off again and checked the injector again and, sure enough, there was a speck of dirt blocking things a bit; it wasn't as bad as what we pulled out of there on Sunday, but it was clearly enough to deprive the cylinder of all the fuel it needs to run efficiently and stay relatively cool.

You can see the small speck -- which looked like a flake of primer -- at the end of the safety wire I used to poke it out. You might have to click on the image to see it. 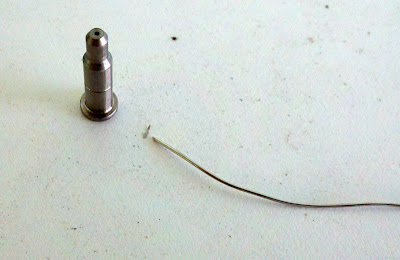 After that, I wanted to check all four lines to see if they were putting out a fairly equal amount of fuel. So I stuck some Dixie cups at each injector and flushed out the lines, dumped the fuel and then turned on the boost pump for 15 seconds. 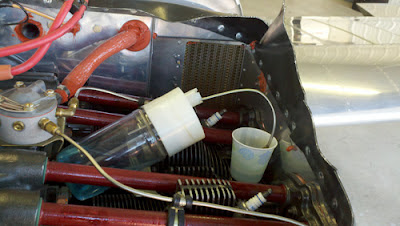 Then I weighed each cup and found that each was within 1 gram or so. The last cup I weighed, the #4 cylinder, showed only 16 grams but I'm chocking this up to them being paper cups and some of the fuel leaking out of them in the time it took me to weigh the other three. Whatever, the #4 cylinder hasn't been much of a bother up to now. 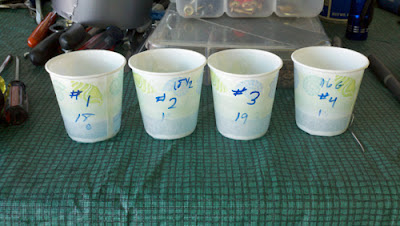 So all that was left was to start the engine for a light look at things. It's too windy to do any flying. In about a 7 minute exercise, all four cylinder temperatures were within 4 or 5 degrees of each other -- that's a big difference from the last few months when #1 was noticeably hotter. And the number 1 exhaust gas temperatures were quite a bit below the other three. That's not much of a change.

We'll see if a flight later this week reveals any difference in temperatures but the engine is sounding better and better -- smoother -- to me than it has in quite awhile.
Posted by Bob Collins at 9:00 PM