The plane goes into the paint shop in mid-April, so the design team contacted me last week to begin working on what the possibilities might be. As you may know, I want to stress the polished aluminum, blending in the fiberglass components without straight lines, so you don't have the usual "this is where the fiberglass ends and the metal begins" that I see with a lot of polished RVs. I also want to modernize the classic Cessna-style paint job, which also takes care of the problem of having a fiberglass buildup on a section of the top forward skin.

Again, here is the "canvas." 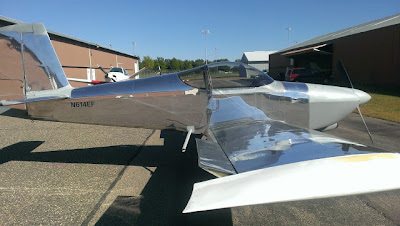 Here are the three initial proposals. 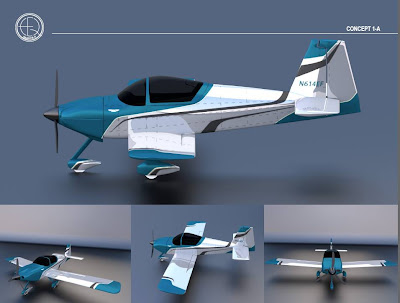 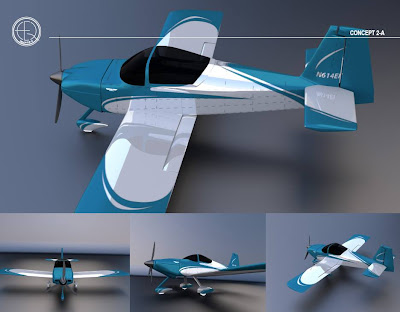 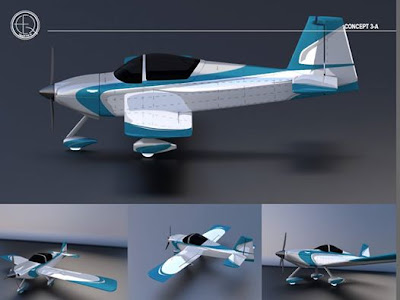 I tossed 3A out of the mix right away, mostly because it didn't draw my eye where I wanted it drawn to: the polish. And I'm trying to avoid having too many colors of paint, especially on the cowling. To me, silver says "this isn't really polished aluminum but we want you to think it is." Also, I don't like the fully-painted tail.

I liked 2A but it didn't accomplish what I needed it to. I have fiberglass "skirts" I put on the side of the metal side skirts around my canopy. They must be painted without drawing attention to them. This didn't do that. A

That left me with 1A, but I didn't like the bottom stripe, so I suggested eliminating that. My flying partner, Joe, also noted the size of the stripe on the VS is too thick.  And also, since the rudder has a fiberglass cap, the paint job doesn't work there. The color has to be taken all the way to the back.

I also suggested changing the wheelpants to eliminate the third color.

With those notations, I got these updates. 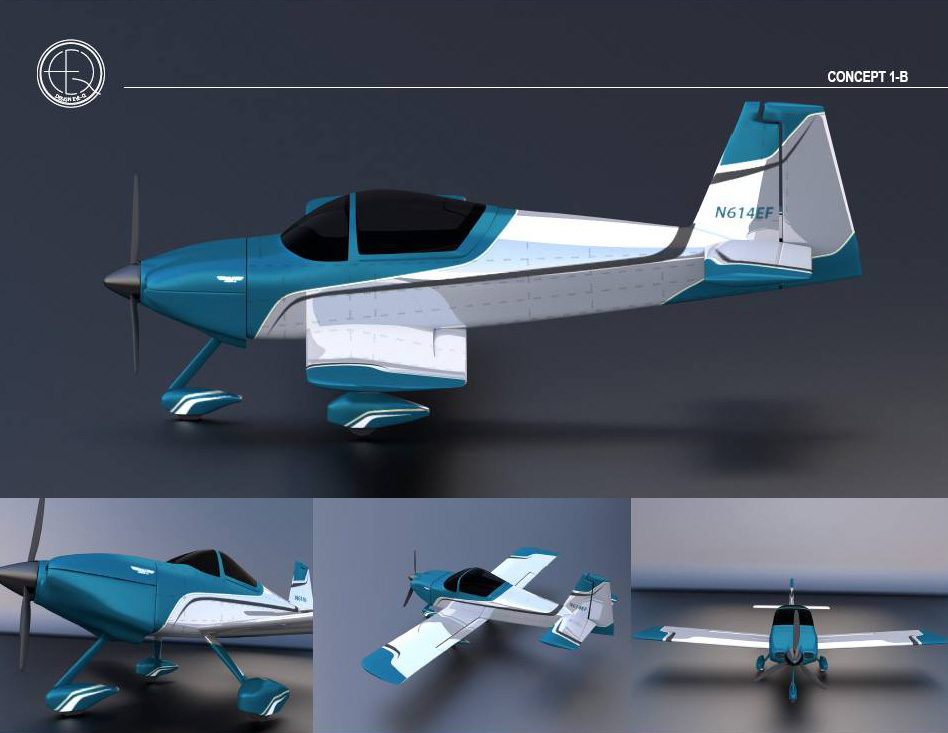 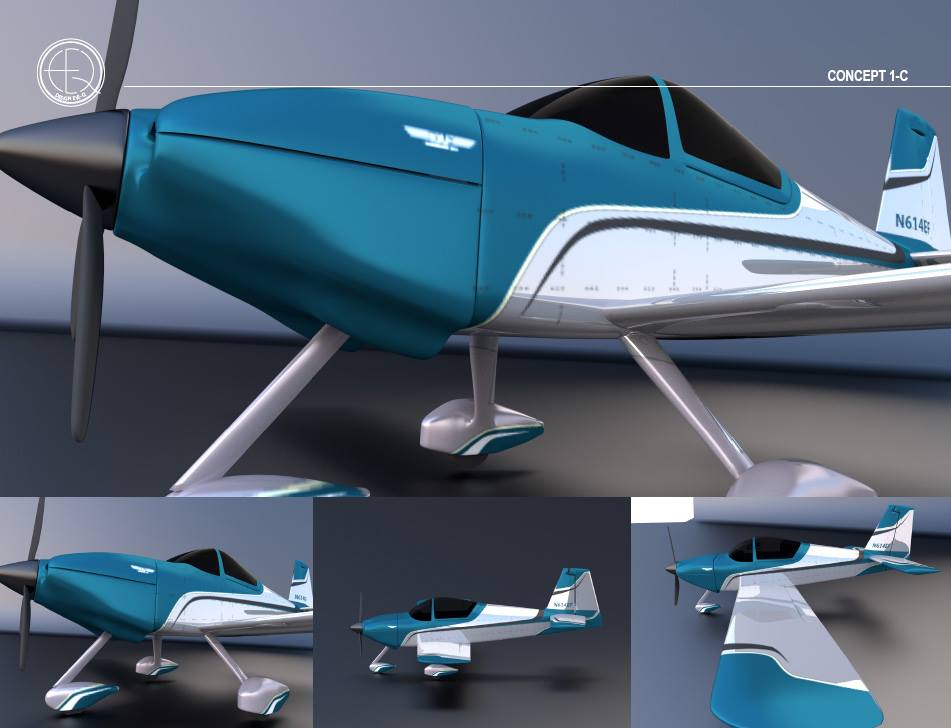 The first thing that was confirmed for me is I'm not a designer. I really hated my idea for the wheelpants. So I've suggested going back to the original 1A wheelpants. You can also see the lower "weight" of the stripe on the VS and you can see that the bottom stripe is gone. I like that. My motto here is "less is more", and, besides, everybody is doing the big "swoopy " paint schemes. I also liked how the fiberglass wing tips (although mine are the "batman" style, which are cooler and suggest a manlier man) are blended into the wing.  I didn't care for the silver gear leg fairings.

From the front, 1C looks quite Lancair-like, which is cool. But, again, I didn't like the wheelpant style.

So, I'm going with 1B so far with the original 1A gear leg fairings. There's also the empenage fairing, which will block that stripe, that needs to be accounted for.

But I think for the most part this will be close to the final design.

How much will all this cost? Well, it's interesting. RVers are terribly reluctant to reveal the price of their paint jobs, which makes it very difficult to compare things. Judged only on my original one-color  picture of the old Cessna 195, the original quote was $5k-$8k. I presume adding in some colors here is going to push that a bit higher. I'll let you know.

Feel free to contribute to the paint fund. :*) 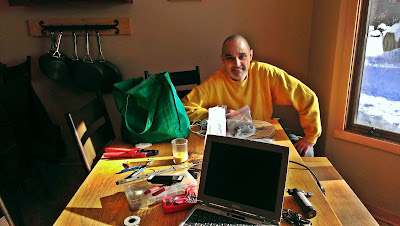 I've had an APRS antenna hanging around three different hangars for at least six years now. Pete Howell sent it along on the day I gave his wife and son a tour of Minnesota Public Radio. At the time, I believe, journalism was a possibility for the lad, who was still in high school. Last time I checked, he's in college now and, hopefully, the Howells successfully beat (metaphorically, of course) the idea of a career out of his head. No matter, I ended up with an APRS antenna anyway.

Then about two years ago, following the excellent instructions from Sam Buchanan, I ordered this gizmo, which has sat unused in that time. 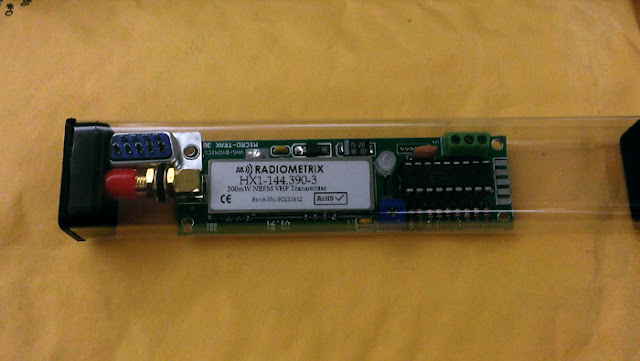 This is the small Byonics transmitter and GPS encoder, which will -- if it works -- send signals to earth stations, allowing people to follow me via Google (aprs.fi). I think it's a really great safety feature to have.

I move slowly, though. Last summer when N614EF was down for the annual, I ran the power cable out to the wingtip, but you need a Ham Radio Technicians license to use one of these things and I didn't have one. So the wire dangles. Stupidly, I didn't run a data line from the GPS 296 connection at the same time. No matter, it's almost time for another annual.

I passed the ham test a week ago, and, of course, that provided an interesting story. I'd studied for weeks and was taking the online practice tests and scoring in the 90s. When I took the test that Saturday morning, I figured I had maybe one or two wrong -- three at the most.

"Robert," the VEC said as he glumly walked toward me.

I gathered up my material and left the room in embarrassment, adding yet another "checkride" to my ongoing list of failures. Driving home, I couldn't imagine how I possibly could have gotten 10 questions wrong. I knew that material. Then the phone rang. "There's been a mistake," he said. "There was another Robert taking the test; you passed." I had one wrong. But at least I had the license.

The next step was pulling out all the stuff I've accumulated for this project over the years. I didn't have any instructions and several of the online guides either aren't setting up the way I am, or have broken picture links, which kind of critical.

So I faced the usual dilemma that people building airplanes and APRS systems have: Where do I start?

You can get a lot of answers to these sorts of questions when you live near Pete Howell. Pete is practically the godfather of APRS for RVers. When I visited him on Saturday, all the required tools were out because he was working on building an electric vest -- presumably, to battle the icy Minnesota winters. "Just bring your wingtip, antenna, some velcro, and the encoder with you," Pete said. He had everything else necessary.

The first step was how the heck to attach the 9 pin D-sub connector to the computer board. Simple, as it turned out. It goes on the end, the connectors touching the solder joints on the board, and add a little solder to keep there. Then a 9-volt battery connector is attached to the same spot the wires for ship power (in my case I'm using ship power rather than tap into the navigation light power because in the summer, the light tends to melt the lens) and ground, use the appropriate cable (you can make them or buy them here). Sam Buchanan provides additional information on the VAF sticky. The configuration identifies your call sign (in my case N614EF and several other standard parameters). By the way, I am KD0WSO. If you're in the Twin Cities sometime, give me a call on the 146.850 repeater. 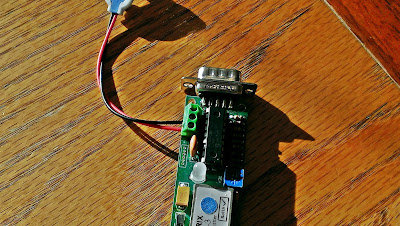 The tracker comes in a plastic case which Pete cut down, and then used a solder iron to put a hole in the end cap, cut holes where the power/ground are attached and combined the whole operation enclosed in the plastic. Pretty slick.

Then it was simply a matter of putting it in the wing tip (after he checked to be sure the antenna still works), and running the antenna wire along the base of the wingtip, and up to the top, making a big J.) For now, anyway, we attached the tracker with velcro and the antenna with some gorilla tape until we see how it works. 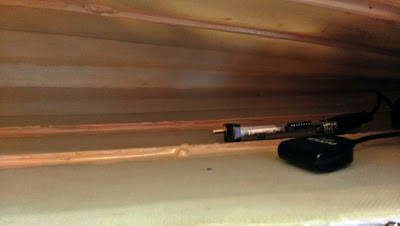 One note: Pete coils the coax and ties it up with some zip ties before installing, I believe in order to eliminate any RF interference. The how's and why's of the electronics of this escape me completely. Pete is brilliant. I write a blog. 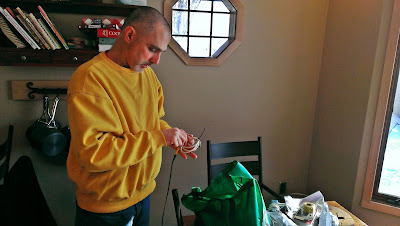 Originally, I was going to run wire from the GPS 296 output out to the wing and into the traker, but Pete had an old GPS puck he wasn't using (Byonics has them here) and so he gave it to me, in exchange for later favors. Done!

And that was pretty much it, in about 45 minutes I was good to go.

The next step is to bring it all back to the hangar when it's not 7 degrees, put a molex connector on the power line from the cabin, and the locally ground wire, and then run two wires from the other gender connector into the tracker so that it will be easy to take the wing tip off.

I'm running the power from the last VP-50 small-amp connector I have left. By the way, I was upside down under the instrument panel running those wires to the switch location on the panel, and did not experience any dizziness or discomfort. Those of you following my Meniere's story will note the importance of that since I had the Gentamicin treatment in December. I'm feeling very confident now that I can get my medical back.

In the meantime, I'll finish up the wiring tomorrow (a holiday) and at some point we'll take it up flying and see if anyone can "see" me.

Update: The installation was pretty straight-forward. I velcroed in the transmitter unit and the GPS puck, and used the little sticky tabs to zip-tie the power/ground wires (I always put some blue RTV in those tabs to further secure the wires. I added D-sub connectors (didn't have Molex connectors handy)... 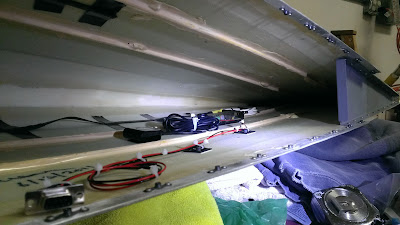 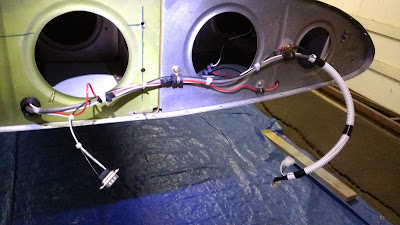 I powered it up and got the flashing green light on the transmitter, indicating that (a) it's getting power fine and (b) it doesn't have a GPS signal, which makes sense considering the hangar door was closed as it was only 10 degrees outsides. So I opened the door and pulled the plane out far enough to get a solid green light and then waited... and waited.... and got the flashing red for a second, indicating it was sending a beacon. Unfortunately it didn't hit a repeater so I can't prove it fully works yet. Perhaps later this week, we'll take it up when it warms into the 20s.
Posted by Bob Collins at 11:38 AM No comments:

A ride in a Pitts

Posted by Bob Collins at 6:57 AM No comments:

Posted by Bob Collins at 8:56 AM No comments: