In the paint shop 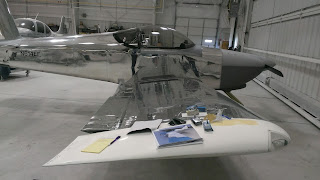 I've never flown N614EF somewhere and then left it behind but I had to do that last Friday night/Saturday morning when we flew it up to Hibbing to drop it off at Midwest Aircraft Refinishing.

Here's the story I posted to Van's Air Force:

Over the years, I've often said the best part about building an RV is you make a bunch of friends along the way and at the end, you also have an airplane.

N614EF is due in the paint shop in Hibbing -- about 200 miles away if you drive -- on Tuesday and because I lost my medical, I need another pilot to ferry it up with me, which means we need two RVs to ferry the both of us back. Because of that fact, if it doesn't get done on the weekend, it doesn't get done.

Naturally, because that's just the way it goes with me, it often seems, the weekend weather was due to deteriorate.

As Friday dawned (I get up for my day job at 5:30), there seemed to be a good chance we could do it on Saturday, though it would be iffy. But as the day went on, the TAF deteriorated.

I was sitting at the Minnesota Timberwolves game on Friday night fretting (even though it was a great game). There was no way Saturday would work, Sunday didn't look any better, and giving up the slot seemed like a real possibility.

"You know, if we leave now, we could do it tonight. Just saying," Bryan Flood, RV-9A driver, posted in the Facebook conversation we were having on the subject.

I thought he was kidding. He wasn't.

"Me too," said Brad Benson.

The game was still close and I was in Minneapolis, so I said I probably couldn't reach KSGS until 10:30. Fortunately, with Corey Brewer's 51 points and a last-second Ricky Rubio steal, the game didn't go to overtime (we would've left), and so the scurrying began.

Carolie and I had separate cars, so we said goodbye and I headed to the airport where my three friends were waiting. Still, this seemed like a crazy idea. The TAF in Hibbing wasn't that great starting at midnight.

But we launched with a general spirit of adventure, and, frankly, a little bit of trepidation. I haven't done a long X country at night in quite awhile.

We ran into some showers around Mora, the strobes lighting up the droplets like fireworks, but the visibility remained outstanding. But up in that area, it's no man's land at night. There's no place to go but down, and don't think I didn't think of that as we approached the area where Paul Wellstone was killed in 2002.

We landed, in crystal clear conditions, found a place to tie down, and scurried back in the waiting RVs for the ride home. Visibility remained fine but the turbulence was pretty rough. Armed with his high falutin' ADS-B, Bryan and Brad went East around it, we went West, Bryan calling out the likely smooth areas, and Mike flying like the old freighter driver he is.

Things did, indeed, smooth out around Princeton for us and as we approached KSGS, we saw the 9A landing ahead of us.

There was nothing left to do but buy some fuel, then stand around at 2:30 in the morning at the tanks recalling the adventure we just had.

"Where are we going tonight?" Brad messaged later on Facebook.

That trip won't be anywhere near as fun.

I'll be by myself.


So yesterday I drove up to Hibbing to go over the final details of the project and to meet the owners, who got their start working for Cirrus when Cirrus was based out of the same two hangars and now spend the bulk of their time working on and painting Cirrus aircraft.

But, they've got a soft spot for RVers who have discovered this jewel of a shop.

In selecting the colors, I "blued" up the teal just a bit and eliminated the "olive" accent stripe that barely showed up in the designs I've posted over the last few months. First, I really hate olive. Second, I think olive and teal suck together mostly because olive sucks alone. And, third, when I looked at the paint sample, it was obvious that it would pull the eye away from where I want it to end up, on the polished metal.

We also arranged that the prop will be painted and balanced.

People who get their planes painted don't talk about the cost and that's always driven me crazy. They'll point out the cost of an instrument panel and the goodies they put into it, but they treat the cost of their paint jobs like it's their Social Security number.

The original estimate -- based on a very quick email many months ago -- was somewhere between $5,000 and $8,000. But in the design process, we got pretty fancy and I think it was worth it so the finally ballpark is $8,000, which includes the design work and the prop. I put $1,000 down months ago to reserve the spot.

Granted, I don't have $7,000, but I've been paying down the home equity loan on the engine in the last few years so I should be able to just add to it and it'll get paid off. Heck, the mortgage will be paid off in a few years; I should be OK.

It's also one of the reasons I said, "Take all the time you need," as I walked out the door.

They liked that. Those Cirrus owners are in a hurry.

But I need a BFR and, of course, I still don't have a medical, so it's not like there's a lot of flying to do. I have a neurotologist appointment on May 7 and that will begin the long process of trying to get pilot-in-command privileges back. We'll see.
Posted by Bob Collins at 9:13 AM No comments: