Getting ready for Oshkosh

It never fails. It's time to turn the calendar from February to March, and it's snowing in Minnesota. So I'm thinking about Oshkosh.

I've been talking to my pals at EAA Radio in anticipation of returning to do more work with them at this year's AirVenture, in particular doing more segments and stories around homebuilding and individuals (I like telling stories of just one person at a time), and I hope you'll share yours with me this year.

They've also raised the possibility of me hosting a one-hour show Monday-Sunday at noon and what guests I might like them (and me) to pursue.

I don't want to just be "the homebuilder guy" but I certainly want to be a homebuilder guy because I think that perspective hasn't gotten as much attention (although the interview I did with the RVers who flew up from Brazil in '10 qualified).

I'd like to get a list of people you'd like to hear on the air for a segment so I can go about tracking them down (and first finding out they're going to be at Oshkosh). An example: I'd like to have both Lane Wallace and Lauren Paine Jr. on.

Who would you like to hear? Don't hold back, now.
Posted by Bob Collins at 5:25 PM No comments: 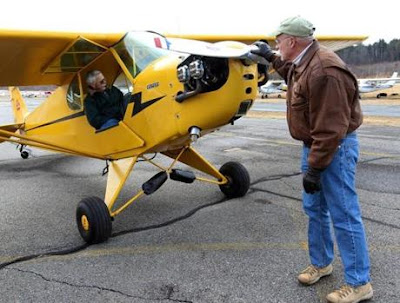 What's this? Another good story about aviation? Don't worry. The usual suspects on Van's Air Force and other aviation forums won't be posting this and commenting that "the media never tells positive stories about aviation."

It's in today's Boston Globe and it's about the marvelous Stow Airport, which isn't far from the ancestral homeland. Add it to your list of fun places to fly to, stop at the on-field restaurant and bitch about the media.


The airport in Stow was a grass landing strip in 1966 when Paul McPherson, an inventor who loved to fly, bought the land and renamed it Minute Man Air Field.

The new airport opened in 1969 as a family business. McPherson’s son, Don, then 23, paved the runway and began to manage the airport. His wife, Peg, opened a coffee shop called Peg’s Place, where their daughter also worked.


After just three years, Paul died in an airplane crash, probably caused by a heart attack, in Acton. Don McPherson took over and still owns and runs the airport, which is now home to a second runway, several flight-training schools, a bakery, a printing company, and more than 60 planes and helicopters. His wife, Nancy, runs a restaurant that serves vegetables, meat, cheese, and other products from local farms. On the weekends, Don is a host at Nancy’s Air Field Café.