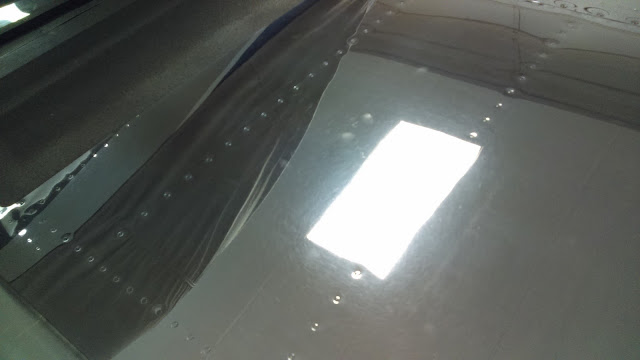 Big, expensive paint jobs are swell for those with big checkbooks. But park a painted airplane next to a polished one, and the polish attracts the eyeballs every time.

And that's the problem. Given enough exposure to polished aluminum, the defects soon become visible.

Thanks to the reflection of the fluorescent light in the photo above, you can see a couple of examples of something that is all over the plane. Fingerprints. But these are not prints from someone touching the plane. They're fingerprints from the application of Nuvite polish. As the instructions say, "dab" fingerprints of polish on the aluminum, smear with the wool bonnet on a drill or rotary machine (or cyclo machine). Voila!

Last winter, I noticed this happening. Very fine scratches would be put into the aluminum where the finger applied the polish, even if the polish was soon smeared around the AL. Even if the compounding (and cyclo'ing) took place.

At the time, my theory was that the aluminum was so cold, the polish was freezing in place and small amounts of ice scratched the surface.

But over the weekend, I polished a section of wing when it was about 80 degrees, and you can see the result, even though the area was subsequently polished with F7, Grade C, and Grade S polish and a new fleece blanket and then buffed with fresh fleece and flour.

Curiously, this started last year, two years after I first bought the polish. I tossed out a small can of F7, thinking that maybe it was the culprit. But an equally-old can of polish yielded the same results.

Is it possible that polish "goes bad" and causes this problem? We will continue to investigate the mystery.

In the meantime, when you look at my plane, leave your glasses at home.
Posted by Bob Collins at 8:59 AM No comments:

Email ThisBlogThis!Share to TwitterShare to FacebookShare to Pinterest
Labels: Polishing 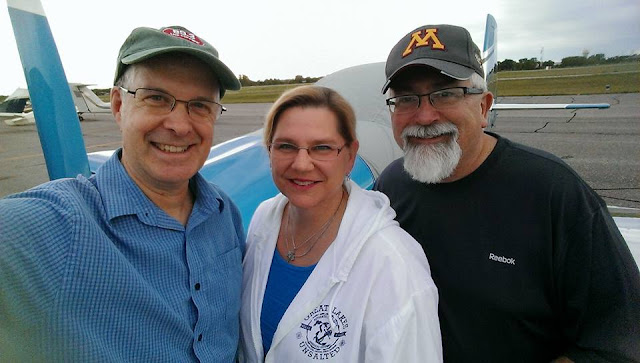 My RV can do many cool things and take me to many enjoyable places. Last evening I learned it can help do something more: provide aid and comfort to people.

This is Sue and Gary. A few years ago, pretty much on this same spot on the Alexandria, MN apron, Sue said goodbye to her brother, her mother, and her sister in law, when they got in a Bonanza for a trip to Colorado. She'd asked her mother not to go; she just had a feeling.

Her brother's plane crashed in a field not far outside the Twin Cities. He had flown into IMC and as he emerged from the 900-foot overcast, the wing fell off, and then the tail. 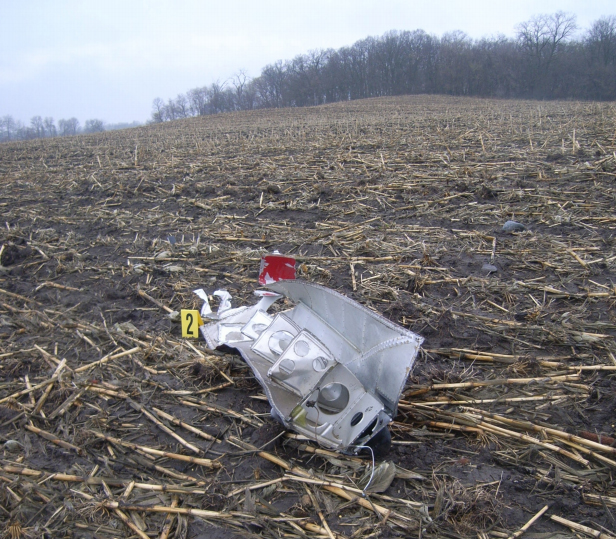 I wrote about it for my day job and when she found it on Google, she dropped me an email last week asking if she could talk to me about it and learn more about my observations. "The tone was different than what I've read," she said. "And maybe it's because you're a pilot."

She had read the Aero News Network (please note: By NO stretch of the imagination will I ever be a fan of Jim Campbell's work). She thought it made her brother seem stupid and negligent. It's a good reminder of why we have to be careful when discussing accidents. Stick to the facts; avoid the judgments. Resist the social media urge to shame the pilot.

"Where are you located?" I asked in a return email.

So I did. And I had a story to tell her. It was about how easy it is for humans to make the same mistake her brother made, and until you experience GetHomeItis firsthand, you can't begin to understand the power it holds over even the most experienced pilots.

I told her about my trip to Massachusetts last fall, just three days after attending an Air Safety Foundation seminar on weather traps, specifically, GetHomeItis.

Three days later, I made just about every mistake I was warned not to make.

It can happen to anyone. Unexpected weather killed Scott Crossfield, and he had the Right Stuff.

As I spiraled through the clouds on an ill-advised and unnecessary attempt to land last year, I thought about the article I'd written about her brother. That was just about the time when I had the thought that someone was soon going to be writing about me.

I told her about the statistic I learned at the ASF Forum. The life expectancy of a VFR pilot flying into IMC is about 3 minutes.

The color seemed to drain from her face. She had never heard the statistic before. She wants to write a book about the accident, she told me. She heard a voice while taking a shower not long after her brother's plane crashed. It said the name of the book should be, "Three Minutes."

She wanted to hear how planes come apart. I explained that while the plane separated after it had emerged from the clouds, the damage was probably done while her brother was still in IMC. For all I know, I said, they might've suffered tremendous G forces that made them black out. I don't know. Maybe. Maybe not.

We chatted for about an hour, but there's nothing really you can say to make anyone feel better about losing three family members.

Her husband said she was very touched that I flew up. "Your brother is part of a very small fraternity," I said. "And now you are too. And it's what we do."

It rained while we were having our coffee, and she begged me not to launch into bad weather. If something happened to me, she said, she could never forgive herself.

I'd seen the showers on the hour-long flight up, and they were widely scattered, I assured her. And I'm a very careful pilot who knows a lot more know about GetHomeItis.

As they walked me out to the ramp for my flight home, her husband asked if they could say a prayer for me. Though I'm not religious by any stretch, I said, "sure." And so there we stood as darkness fell, her husband asking for a higher power's protection on this and all future flights.

You fly a lot more carefully, I noticed, when someone you've known for two hours holds your hand and wishes you godspeed.

I sent a text message when I got home, to let them know I arrived home just fine, vowing silently to myself never to put my family in a position of wondering what happened to me that time I went flying.
Posted by Bob Collins at 9:23 AM No comments: