Making your own fuel lines for your RV airplane 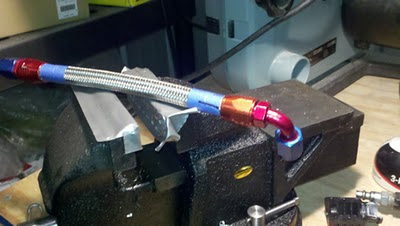 If you've not yet worked significantly on the firewall forward portion of your RV airplane project, let me warn you: fuel and oil lines are unbelievably expensive. I learned that lesson the hard way: Buying the stock fuel and oil lines based on Van's drawings.

There are too many engine combinations (mine is an IO-360 from Mattituck with vertical updraft) to make buying stock fuel lines worthwhile. Even if you could get them to fit on your engine, you'll likely be making some concessions to efficiency -- and maybe even safety -- to get them to fit.

It's possible, of course, to have your fuel and oil lines custom built, and certainly there are plenty of RVers out there with enough money to build their airplanes merely by writing checks. I am not one of those people, however, and I strongly believe in the basis for building your own airplane: recreation and education. I've learned so much from building my RV-7A so far, that I enjoy the challenge of understanding how things work.

(Read more on RV Builder's Hotline)
Posted by Bob Collins at 10:20 AM 3 comments:

Email ThisBlogThis!Share to TwitterShare to FacebookShare to Pinterest
Labels: Engine

It seems like an eternity ago, but it was only a few short years ago when the sight of an RV-related video online was the sort of thing to make me drop what I'm doing. There were few of them.

Now, they're everywhere and the thrill is mostly gone. They're not that great to begin with and seeing a shaky out-the-front-window view of an RV simply isn't enough to provide substantial builder motivation for me anymore.

There are exceptions, and this week Matt Dralle, who runs the RV List (still the best place to get good archived RV-building information, because the search engine actually works), has uploaded a couple of well-done videos from his RV-8 test flights.

Does it motivate me? Sure, it does. The problem is it's 17 degrees out at the hangar this morning, and I'm in one of those stretches when every task runs into some roadblock.

I got a bunch of orders from Van's (baffle kit and hose-making kit) and Aircraft Spruce (hardware) the other day so I thought I'd finish up getting the starter cable secured around the engine as it makes its way to the firewall.

That ended when I realized I didn't have the right sized Adel clams (DG-5) to secure it to the aluminum prop oil line (I don't have a controllable prop, but I've got the system configured for one to preserve resale value). Last night I started creating "fake" fuel lines (using plastic tubing from Ace Hardware) only to realize that I need a straight fitting instead of a 90 degree fitting. I bought some steel fittings for the engine to connect the oil cooler hoses but when putting one in, I accidentally bashed the threads for the flared fitting nut on one. So now I have to order another 45-degree fitting.

I ended up taking a bathroom break and walking up to the terminal. Both bathrooms were out of toilet paper.

That's a sign to go home and watch football.
Posted by Bob Collins at 8:36 AM No comments:

Doug Weiler, who heads the RV builder's group in the Twin Cities, is a fine writer and does a great job of issuing the group's quarterly newsletter. It's been more than 10 years since I joined the group and, you know, there really aren't a lot of newsletters -- including EAA chapter newsletters -- that are so consistently published, let alone continuously published while maintaining high standards.

You can find it here.
Posted by Bob Collins at 11:00 AM No comments:

How to build your own airplane

The RV airplane's baffling kit arrived in the mail yesterday, along with the fuel lines and tools I need to build my own fluid lines in the airplane. But it's 36 degrees out there and I don't have much heat in the hangar and I'm having a hard time getting motivated to work on the airplane.

If only I had a book to read in the meantime:

Posted by Bob Collins at 6:52 AM No comments:

I work for a non-profit whose president is regular skewered for making too much money, so I bring a different perspective to the question of reasonable compensation for a president of an advocacy organization.

That said, 14.5% pay increases for AOPA's top executives, including more than $1.8 million for the horrendous Phil Boyer, before he mercifully retired, is stretching the bounds.

AVWEB has the story, but unfortunately buried new president Craig Fuller's salary deep into the story. It's about $500,000, which is a lot of money, but is not unreasonable for a CEO.

Still, it will be worth popping some popcorn and watching the AOPA membership reaction, given that annual dues were just raised to $45.

The salaries of Washington are simply too incomprehensible for "normal" (that is, outside of the Beltway) people. Yesterday, for example, I found out the very excellent airport manager at South St. Paul airport (KSGS) has been laid off by the city council, in order to "save" $40,000.

I doubt the City Council considered what's involved in running a small airport, including managing fuel sales and keeping tenants happy, especially on a field that houses both Wipaire and Ballistic Recovery Systems. They're going to divide up his duties among three city departments, none of whom -- as far as I know -- knows anything about running an airport.

I doubt they've made the connection yet.
Posted by Bob Collins at 8:01 PM 3 comments:

Email ThisBlogThis!Share to TwitterShare to FacebookShare to Pinterest
Labels: Rants

The engine in earnest

I hung the engine on N614EF more than a year ago, but now that the cowling is -- mostly -- done (structurally speaking ), I'm trying to get going on serious work to get the engine all hooked up.

Yesterday I spent a ridiculous amount of time getting the ground strap from the engine case to the firewall hooked up. I wanted to make the power line from the contactors to the alternator but two things cropped up -- I can't find any of the paperwork (or wiring) for the alternator (which I put up last winter), and I've noticed some builder sites are running a #8 wire, and the instructions call for a #2. I'm going with the #2, but don't have the connectors for the wire. More ordering. More delay. More shipping.

So today I'm adding on some fittings for the oil case which will attach hoses to and from the oil cooler. And, of course, I ran into problems. 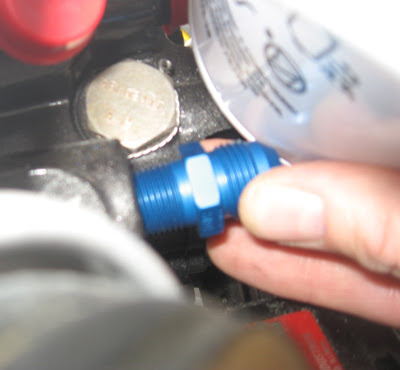 This calls for a straight fitting, but I have the right angle oil filter adapter on this IO-360 engine from Mattituck. What should I do here? A 45 degree fitting?

I also installed this 45 degree fitting on the other oil connection. But it's unclear how I "clock" it. Which way should it be pointing? 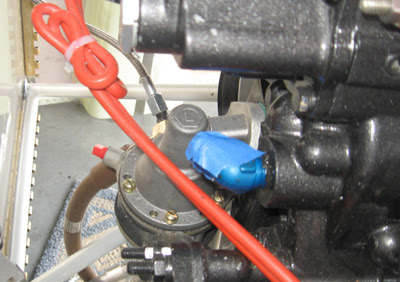 I also looked some more at the fuel line from the pump to the fuel servo. On a 7A, there's VERY little room to run the thing, especially with a vertical updraft engine. I need to figure out how close to the heat shield on an exhaust, the fuel line can come.

Email ThisBlogThis!Share to TwitterShare to FacebookShare to Pinterest
Labels: Engine

Building an airplane in flyover country, I imagine, is like the exchange rate for the dollar. I've put 2,315 hours into the project so far, which I started in July 2001. I'll bet 2,315 hours in other parts of the country are equivalent to half that.

Part of that is my refusal to adjust too much of the rest of my life to the demands of building -- lately my vice is season tickets to the Minnesota Timberwolves because I can hang out with my adult children, which beats airplanes any day -- but part of it is the reality of the seasons, especially in an unheated T-hangar.

From the moment the hangar door opens for the first time in April (usually), an airplane builder in the north hears the clock ticking. Winter is coming and there's lots to get done before it does.

I was fortunate this year that it stayed warm fairly late into the year, so I was able to get most of the structural work and some fiberglassing accomplished on the cowling.

But this morning it's 28 degrees and my building list includes things like "pack up all the paint, epoxy, and fluids and move them back to the warmth of the house," lest they be destroyed by freezing.

My hangar has a bit of a problem with flooding, because of the way the city graded the ramp. In the winter, the melting snow on the roof ends up flowing back into the hangar and then freezing. Fortunately, we have the American Reinvestment Act doing its good deed. Because of the "stimulus," there are road-construction signs everywhere, each weighted down with sandbags.

So I liberated a couple from the clutches of big government the other day and put them along the bottom of the hangar door. Sadly, this mean that I can't open the hangar door until next spring.

For the first time in months, I sat in the hangar (I stop on the way home from work each day) and wondered "what can I do?" There was nothing to do because I'm now transitioning to engine plumbing and orders from Van's and B&C hadn't arrived yet, and I also haven't ordered the things I need to start making the various hoses I need to make. This is the transition period when one switches from "airplane building stuff that you should do in the warm weather," to "airplane stuff you can do in cold weather" mode.

I also failed -- again -- to pick up 5 gallons of diesel that powers the kerosene heater. A builder's workshop needs to be comfortable, especially when it's mostly metal and cement.

Eventually, I'll get back on an even schedule and a good list of things that can be done when it's cold at the hangar, but this usually takes a few weeks of re-evaluating where I am in the project.

So here I sit in the warmth of Casa Collins, pouring over increasingly frayed airplane plans, coming up with that list.

This weekend I hope to attack the project again. But first I have to get the snowblower ready.
Posted by Bob Collins at 8:56 AM No comments: