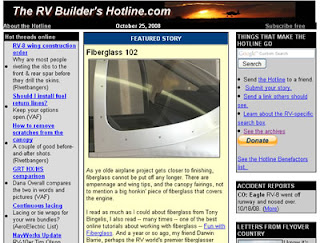 This week's issue of the RV Builder's Hotline is now available here. The main feature is a look at fiberglassing.
Posted by Bob Collins at 8:22 PM No comments: 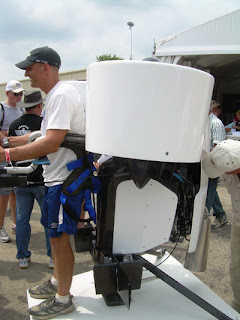 Why I didn't do an extensive story on the Martin Jetpack when I saw it at Oshkosh last summer is beyond me. But this week I'm filling in for Jon Gordon on the American Public Media program Future Tense and it struck me as a good idea to marry my job with my hobbies, if only for a day.

So I called Glenn Martin in Christ Church, New Zealand this afternoon and talked to him a bit about his product. For you Oshkosh enthusiasts, he acknowledged that some people were disappointed at AirVenture that they "didn't see James Bond." So Martin told me his team will be back at Oshkosh next summer and this time "we'll bring some James Bond."

The short 5-minute program I produced will run on Monday, but if you'd like to hear the raw tape of the interview, here you go.


And here's a video from the EAA of the Martin Jetpack.

Incidentally, I know this Saturday is the day I'm supposed to have an RV Builder's Hotline delivered to those of you subscribe (it's free, you know!). But because I've generally been goofing off and also doubling up duties at work, I haven't gotten around to writing the main story for this issue -- fiberglass. So if you don't have a Hotline this weekend, please don't hold it against me too much.
Posted by Bob Collins at 7:48 PM No comments:

Alan Henley, a pilot with the AeroShell team, is paralyzed after an accident just prior to Oshkosh. His wife has been keeping a journal on Caring Bridge that is hopeful and heartbreaking at the same time.

But the other day she posted this:

I was just feeding Alan his lunch and he was laying in the bed and all of a sudden we heard this very distinctive rumble in the air, we both knew what it was. I ran out the front door and all of a sudden four red and white T-6's in tight formation buzzed the house treetop high. Some of our neighbors came running outside and I told them that's just the way the team says hello!

When I came back in Alan was smiling so big. We talked to the guys on the phone and he said if he had the money he'd pay for the gas and have them do that again. :) He said he didn't realize how loud they are! He's usually the doer not the doee.

Thanks so much guys for doing that! It was awesome just to see Alan's smiling face! We love you!

I was hoping my enthusiasm for the RV builders BBQ at Oshkosh would have returned by now, because I'd really like to do it again. But now I'm thinking perhaps there's something the RV community can do at Oshkosh for Alan Henley's family.
Posted by Bob Collins at 3:23 PM 2 comments: 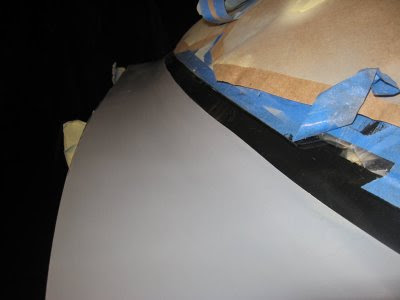 I don't know how you spent your summer but it seems as though I spent mine making this one stupid part of the RV airplane project -- the fiberglass fairing that creates a transition between the top skin and the bink hunk of plexiglass that forms the canopy of the airplane.

I started in July, I believe. Most people do this in one week but when it comes to building, I'm not most people. Everything is a struggle with a complete lack of confidence that what I do is the right way to go.

Tonight, I finished the fairing when I removed the line of electrical tape that I used to mark the top edge of it on the canopy. The result is a very nice edge that thins nicely to the transition, where the fairing is just the thickness of the tape. 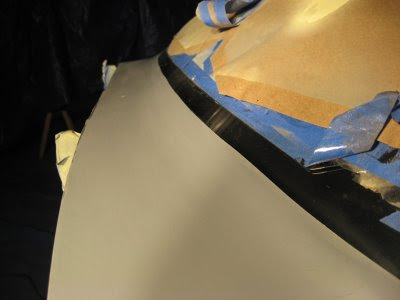 In the 1,806 hours of building so far, this part, I think, is the first one to be completed that really is quite visible to the outside world when the plane is done. The rest of the airplane will eventually be covered with paint, but a bad mistake on this part and everyone will know forever.

And so I spent almost three months working on it. Is it perfect? Oh, hell no. There is one spot where two pieces of tape joined that is quite rough on the edge that is slightly chipped. I'll reinstall the tape in that spot, add some more epoxy filler, and sand it out. The sides -- where the compound curve comes around to meet the side skirts -- cam eout better than I thought it would, but it's still a somewhat ugly spot. On the skin itself, near the center, you might spy a flaw, but it's just a spot where a small part of the top layer of primer came off when it stuck to the electrical tape as I removed it. Easily fixed by sanding and repriming.

But the feathered edges of fiberglass on the skin came out wonderfully, thanks to lots of filler, and lots of sanding.

There are a couple of small spots where some rivets show that I'll fill and resand. But for the most part, the fairing is finally done.

For the heck of it, I went back to my builder's log to see how much time I've spent on the canopy construction since I started it in February 2007 with the beginning assembly of the canopy release mechanism. 235 hours. The fairing itself? Sixty hours. 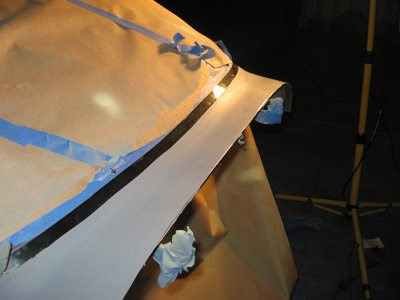 I walked away from this part of the project a number of times, but kept coming back to wrestle it to the ground. Here's how it looked when I started on August 2nd. Here I had just finished making a rough mark of where the fairing would go. 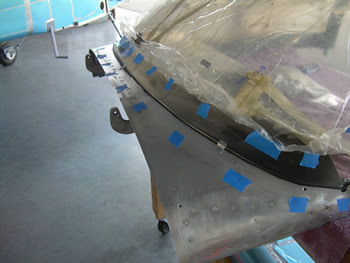 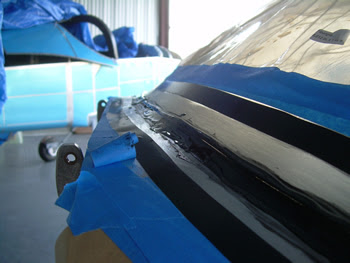 Now, here's why I love RV building. During the course of documenting the fairing project, a friend of mine -- Tim Rowell -- looked at the blog and saw what I was up to. Tim is one of the smart 3M people around here and someday he'd like to build an RV. When the project was in the garage, he'd stopped by every now and again to see how I was doing, but I haven't seen him in a year or so.

Last week when I got home from work, there was a shopping bad on the front porch. Tim had gone to the 3M employee store, and filled up the bag with respirators and sandpaper, and some material for working with sanding fiberglass. And last night he brought by some 3M finishing pads.

So now I call this "Tim fairing." Everone who works on the plane, has to autograph a piece of it. The next time he's by the hangar, I'll have him add his signature.

By the way, for those of you building RVs, two tips for you: Once you shape the fairing, consider using the 3M sanding sponges and pads. They work really great and can be bent to the form of the fairing radius and compound curve.

The second tip: Remove the electrical tape very slowly. Go to fast and it's easy for the edge to tear, embedding a small piece in the edge which will give you a rough edge. When removing the tape, pulll it off into the edge. Basically as you remove the tape, you're folding it over into a triangle and pulling down toward the canopy skin.

I've finished this part of the project just in time. Temperatures tonight are heading toward the 30s and it's time to put canopy work away for the winter in this unheated hangar. I didn't come all this way to crack a brittle plexigasscanopy in the cold. So now I'll work on reinstalling the canopy release mechanism, add the heaterbox and doubler plate to the firewall, set the breakout force for the nose gear, and then get started with electrical runs and avionics.
Posted by Bob Collins at 10:43 PM 1 comment:

Email ThisBlogThis!Share to TwitterShare to FacebookShare to Pinterest
Labels: Canopy

The quest for perfection 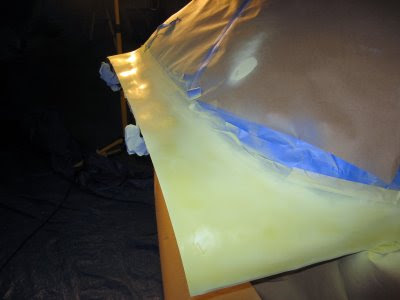 I got no takers on my request for someone to take this canopy windscreen fairing project off my hands, so I had little choice but to plug away.

It's almost done and it's come out OK, I think, but not having another RV handy to doublecheck, I'll just have to go with my gut.

Last night I put some filler primer (actually, it was advertised on Aircraft Spruce as being filler primer, but when it arrived, the rattle can said nothing about the "filler" part of primer) on the canopy skin and fiberglass, preparing it for a final sanding before I remove the tape and, hopefully, end up with a good edge.

I've been working on this a few hours at a time for two months. My work schedule being what it is (blogging is hard work, especially if you have to come up with 7-8 items a day!), I usually only get an hour an evening and a few hours on the weekend at the hangar.

The point (literally, a point) at which the top edge disappears into the side skirts isn't a good as I would have hoped, but at this point, it will have to do. The temperature hit 80 over the weekend, but is back into the 40s now, and it's getting pretty cold to be working around plexiglass.
Posted by Bob Collins at 8:33 AM No comments:

Email ThisBlogThis!Share to TwitterShare to FacebookShare to Pinterest
Labels: Canopy

Is the end near?

I'm watching another meltdown of the financial markets today and while I understand the "don't panic" mantra that leads to the "do nothing" approach, the "do nothing approach" does nothing for the future when you get to be my age. Retirement isn't that far off, or so I thought.

So far this year, I'm down $80,000 in the retirement account. I know for a lot of you pilot-types, that's walking-around money. For me, it's real dough. Coupled with the losses of the last few years, and the fact that since this particular administration took office the economy has been a disaster, some of its own making, some not -- I'm now faced with the very real prospect of not being able to retire in anything near a comfortable level.

In this environment, how can I justify soaking money into an experimental airplane project?

My RV-7A has 1,800 invested in it. A new IO-360 Mattituck engine is sitting in the box. The canopy is about done. There's little wiring done yet. STrobe system, a PS Engineering intercom (the four-place simple one), Artex new 406 mhz ELT, ICom A-210 are sitting in boxes. The TruTrak one-axis autopilot is installed. It's up on the landing gear although I haven't set the breakout force of the wheel yet.

But given the events of the last few months, I don't see how I can't listen if someone is interested in making an offer.

However, if you're just bottom-feeding looking for a sucker, move along. I'm really looking at mere survival here.
Posted by Bob Collins at 11:23 AM 3 comments: