Welcome to Minnesota! Now go away! 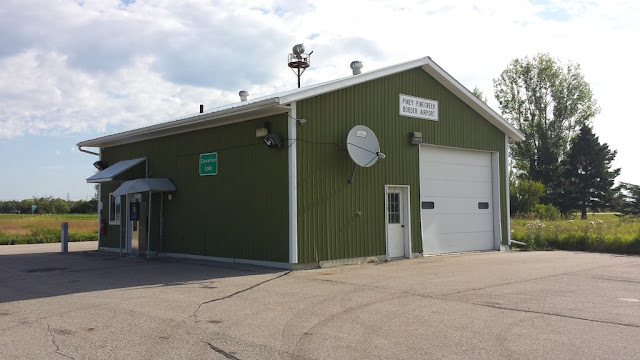 You must have to be a patient and forgiving sort to live near Roseau, on Minnesota's northern border. People there have to put up with things we non-border people take for granted. The freedom to move around America, for example.

It took an around-the-country trip by a California teacher to tell me something about my adopted state that I didn't know. There's an airport in Minnesota on which a runway spans two countries, surrounded by some unwelcoming feds.

For the last few weeks, Scott Chastain has been writing installments in his travelogue of last month's journey, during which he flew his homebuilt airplane -- an RV-8 -- around America, dropping in at small airports to discover the sort of wonders that mostly small towns possess. He eschewed hotels and depended on the kindness of people.

"What do you have in Solon Springs?" he asked a resident of that northwest Wisconsin town.

"We have a Dairy Queen," the man replied.

Lesson: People are proud of what they have in their towns, as well they should be.

Along his journey, he encountered plenty of kindness, flying without any sort of plan of where he'd end up on any day.

And then he made it to Minnesota.

"There wasn't a whole lot underneath me but marshland, lakes, and tundra as far as the eye could see," he writes.

He wanted to land at Piney Pinecreek Border Airport, which is shared by Piney, Manitoba, and Pinecreek, Minn.

The airport once resided entirely within the United States, but when the runway needed extending, it could go only go across the 49th parallel.

When Chastain visited, his string of welcoming encounters around America ended.

"It was like something out of a dystopian novel," he said on Van's Air Force.

I was wiping down the Dove, enjoying the beautiful greenery and the rolled-up hay bales, when suddenly an SUV with U.S. Customs markings pulled up. Leaving the engine running, an officer stepped out wearing combat fatigues and body armor.

He was a young guy. He didn't look happy. In fact, he looked pretty stone-faced and too serious for his own good. I looked at his uniform. Stitched over his heart was the name, Miller.

“Good morning!” I greeted him. I was in a great mood. Then that guy showed up.

“Where are you coming in from?” he asked me. He looked at me like he was about to reach for his gun.

“Well, we don’t open until nine o’clock. Why didn't you announce yourself coming in?”

“Yes, sir,” was all I could say. I felt like I was on the verge of being ordered to lie face-down on the pavement with my hands behind my head or something.

Then officer Miller told me, “Look. You see those tanks right there?” He was pointing at the fuel farm. I told him that, yes, I saw them. “Well if you walk past those, you’re in Canada, and you’re gonna be in trouble. Then if you try to walk back, you’re gonna be in even more trouble. You can use the restroom and get fuel if you need it, but stay on this side of the tanks. Got it?”

While the Customs office only opens at 9 a.m., Chastain wasn't crossing a border (he would have if he'd traveled farther down the runway). Chastain was free to move about America.

“Okay, thanks,” I said. “Have a great day.” He didn’t reply. He just got into his SUV and drove off. That’s when I decided to use the restroom and get out of there before he changed his mind again and came back to arrest me, for God knew what.

I quickly climbed back into the plane and strapped in. It was clear that I was unwelcome and I could not wait to get out of there. Why in the world was there a rotating beacon and a lighted runway if you could only land there at certain times of the day?

I cranked the Dove over and rolled forward. As I was taxiing out, I saw the SUV racing toward the tarmac again. It was 9:00. There was a Piper coming in on final, and I waited for him to clear the runway before I back-taxied to runway 33. I didn't waste any time blasting out of there. As I pulled the Dove back around and headed for Roseau, I looked down and saw Miller walking up to the Piper. A family was getting out of the plane, and I felt sorry for them.

In the rest of Minnesota, we have a freedom of movement we take for granted. Along Minnesota's northern border, the law-abiding are suspect.

I apologized to Chastain for the attitude my state showed him. But it was all good, he said. His next stop was Roseau, and he got to tour the Polaris plant.

If you have time to kill today, there are few better ways to spend it than reading his travelogue, which starts here.
Posted by Bob Collins at 9:43 AM No comments: 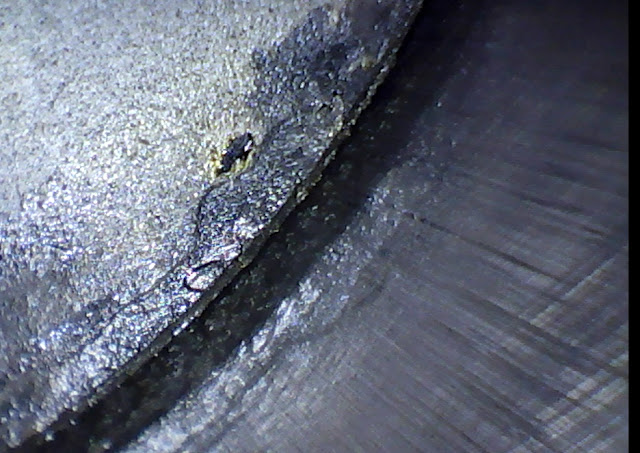 Come with us now as we explore the mysteries of the cylinder!

As I mentioned earlier, I was a little non-plussed that the compression in the #3 cylinder had fallen to 71/80, when it was 79/80 or so in January.

I couldn't find any reason for it. I didn't hear any air escaping during test, although I don't have very good hearing and I was kind of busy holding the prop under pressure to keep it from spinning.

So I bought a boroscope, the one Kevin Horton recommended on Van's Air Force -- the Vividia VA-400, which I think is a pretty nice piece of equipment for $149.

Last evening I had a look. Here, go on a 12-minute tour if you can stay awake.

As I was playing with the thing, my pal, Mike Hilger -- you probably know him from SteinAir -- stopped by. Mike is an A&P and looked at things and said things looked OK. We did note some carbon buildup, but he suggested flying for another 10 hours and checking the compression again because it's not unusual for these sorts of things to disappear.

Fine. I buttoned things up.

I posted the video -- a much shakier video -- on Facebook and another A&P (at least I think he's an A&P) said "pull that jug and fix the the broken ring."

I don't know what a broken ring looks like but apparently he sees something there that others don't.

So I'm looking for analysis from other people who know what to look for.

For the record, I've noticed no increase in oil consumption.
Posted by Bob Collins at 9:03 AM No comments:

I flew back to visit my mother in Massachusetts last week, which put about 15 hours on the tachometer (I don't have a Hobbs meter) and put my oil change slightly over schedule at 55 hours.

So over the weekend I changed the oil and filter and tested out the new oil filter cutter I bought at Oshkosh.

It's a horribly messy process but eventually I cut the paper out of the filter to examine.

Here's what I saw. See those two flecks? There are about four of them total. I'm not convinced they didn't come off my workbench when I rolled out the paper on a paper towel and stared separating each fold to inspect with a magnifying glass and magnet.

The magnet didn't pick anything up. 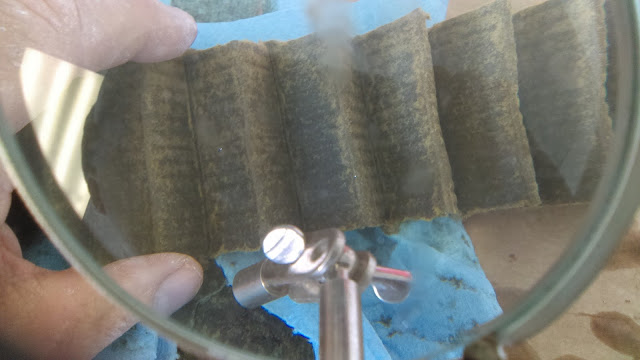 I also pulled out the new compression tester and found the #3 cylinder at 71/80, which is pretty pathetic seeing as how it was 79/80 six months ago at the annual condition inspection.

However, it's possibly I'm doing this wrong. My friend, Brad,is going to bring is equipment over some evening this week and we'll try it again.

I can't say the engine has been running rough but I've never been convinced the #3 is entirely healthy, so we'll see. I did notice that as I dialed up the air regulator on the compression tester, the right gauge wasn't moving until the pressure at the regulator went to about 30 and then it snapped up. I wonder if that might be indicative of a stuck exhaust valve and the pressure popped it closed?
Posted by Bob Collins at 3:55 PM No comments:

A flight across America

I just got back from taking my RV-7A up to my hometown for the third time and I never fail to return without marveling at the capability of the machine.

I also never fail to marvel at the changing topography of the country as you go from the upper Midwest to the northeast. I think that because it's so populated, people think New England is wall-to-wall people. I'm here to tell you there are a lot of forests in New England and it doesn't take a flatlander pilot long to think, "Holy crap! If I lose my engine now I've got problems."

Here's a video of my return flight.

You have a lot of time to think on a 1,034 mile flight. For one thing, I wish I'd put in the full DigiFlight II two-axis autopilot instead of the DigiTrak single-axis one. I leave the navigating to the autopilot, but I have to continually adjust altitude and, the RV-7 being a twitchy kind of plane, it's a workload to stay level, even with a manual trim. I thought of this as I realized on the trip that I don't spend a lot of time looking at the sites below. I spend a lot of time holding altitude and monitoring engine systems.

But it would've cost me another $1,500 or so and that's money I didn't have then and don't have now.

The other takeaway from the trip is my hometown's insistence on making the same decisions that have gotten it into its predicament as a declining mill town. It got some federal money so it's building a nice new terminal building. The old one was cramped but it had an airport restaurant and people all over New England flew in for breakfast. I presume they might've even bought some gas even though the price there has always been unreasonable to me.

They're not going to allow the restaurant to open in the new building, which will be mostly empty. There'll be some vending machines, I'm told.

So fewer people will come, fewer people will buy gas and the glitzy new building won't make the pilots who do come notice the weeds on the ramp and the cracks in the taxiway. If you own a nose-gear RV, you best taxi slowly.

When I arrived yesterday morning to leave, the place was locked up tight. It was 7:30 a.m. on a weekday. So I hopped a construction fence after throwing my computers, luggage, and headphones over.

I didn't pay the $30 in parking fees for the time I was there because there was no one to take money. Maybe I'll send it to them.
Posted by Bob Collins at 12:20 PM No comments: