To Rushford for chili!

Although N614EF and I haven't ventured to that many airports outside of Minnesota, it's hard to beat our two favorite ones in the competition for the "best airport ever" title.

Sky Harbor Airport in Duluth sits right on Lake Superior, is a 40-step walk from the beach, and is Minnesota's version of the famed -- and late -- Meigs Airport in Chicago. It's a place where my wife -- who is not overly excited by flying -- will go enthusiastically. 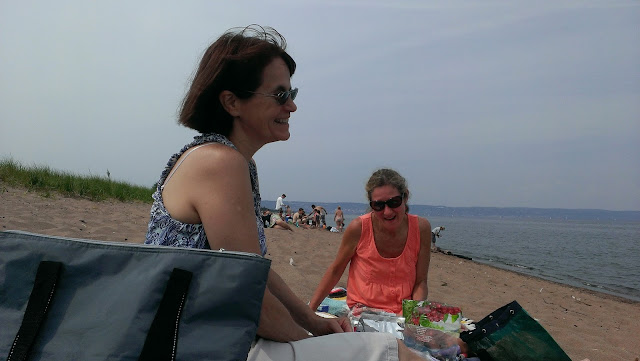 But there's one thing Sky Harbor doesn't have -- at least in our visits so far -- an unmatched gregariousness.

It sits atop a bluff in "bluff country", offering lovely views of the surroundings below.

But it's the people we've met there that makes the 80-mile trip (by air) from South Saint Paul so rewarding.

Yesterday, I flew down for EAA Chapter 919's annual chili feed. The chapter is incorporated in Winona, but, according to one founding member, WONA isn't a very aviator-friendly spot, so many of their activities take place in Rushford. Good choice.

It's possible to camp on site and if you do, you can use the facilities -- a house, really -- at the airport terminal. Our host said if you want bikes, they'll bring theirs over.

Rushford used to have a courtesy car -- a Toyota -- but it died and they haven't convinced the town to pony up $1,000 or so for a new one. Too bad, because there are shops and restaurants in the region that visitors would most certainly patronize, if they had a way to get off the bluff.

True, our hosts did say "we'll bring one of our cars over" if you decide to visit, but nonetheless it would be wise for the region to invest in a beater so they don't have to do without a car.

In that vein, I'm kicking myself. Last February I traded in my 2004 Chevy Cavalier -- still in great working order -- so that my wife and I could have a new car (a payoff for her unwavering support and sacrifice during the 11 or 12 years I was building a plane). The dealer -- Luther Subaru -- offered only $800. It didn't occur to me at the time that I just should have donated it to the Rushford Airport.

If you're in the upper Midwest, it's worth visiting at your next opportunity. Starting next month, there'll be a hamburger feast on the first Saturday of every month.
Posted by Bob Collins at 10:07 AM No comments:

I went out yesterday, one of the more beautiful days of the Minnesota spring, to see if I could find a colleague, who was running her dog up in Pine City. No luck, but it was a fine flight which I wanted to take before the earth started heating up and causing all sorts of turbulence. The return -- over Saint Paul -- gave me a chance for a little air tour. It's fun to look down at things in this video, because I'm too busy flying when I'm actually flying to sightsee. There were five planes to contend with in the pattern in South St. Paul, but I shoehorned in. It's funny: Once you fly to Oshkosh, fitting five planes into a pattern at a non-towered airport doesn't seem like that big of a deal.
Posted by Bob Collins at 9:43 AM No comments: