Keeping the neighbors at wing's length

(Posted from the day job)

The Star Tribune story today on small airports and the challenges from the encroachment of neighbors is one that's being played out all across the country.

Many airports, as the Associated Press reported a couple of weeks ago, are being closed to turn them into more housing developments and industrial parks.

Others, like South St. Paul's Fleming Field, have somewhat warmer relations with their community, provide jobs in their territory, and are deeded to the city (as the Navy did for South St. Paul many years ago) requiring them to remain an airport.

How a small airport and neighborhoods can co-exist. At Fleming Field, two homes are being torn down (the owner of at least one was more than happy to sell), and some trees on the other end of the neighborhood are being cut down.

Will it make a big difference? Probably not. But the FAA has its rules and the FAA rules.

I videotaped a flight around the airport today to provide an additional perspective on today's article.

Sit back and enjoy your flight.

Posted by Bob Collins at 4:21 PM No comments:

Many of us have been waiting along time to find out why Tony Kelly's RV's broke up over Hamilton Township, New Jersey in late 2013.

Tony, an air traffic controller, was a great friend on Van's Air Force and his loss probably hit the RV community harder than any other fatal crash since Bill Benedict, a Van's Aircraft executive, and his son were killed in April 2000.

An RV-7A, obviously, shouldn't break up in the air. That it did caused the usual amount of speculation -- he had suffered a damaged rudder some time earlier, and a Van's service bulletin on elevator hinges all fueled massive amounts of speculation.

The National Transportation Safety Board has now released its report. And it suggests Kelly was performing aerobatic maneuvers that exceeded the plane's design limits.

After taking off, the pilot climbed the experimental amateur-built airplane to 6,500 feet mean sea level in visual meteorological conditions; the airplane remained in level flight for about 13 minutes and was traveling about 130 knots indicated airspeed. The airplane then suddenly lost about 3500 feet in altitude, accelerated to about 220 knots, and reversed direction within a 10 second period. Moments later, the airplane was observed traveling in a northwesterly direction at a low altitude, almost completely upside down at one point, with pieces of the airplane falling to the ground. Recorded radar data revealed that the airplane had entered a steep descending and accelerating left turn, and portions of the empennage separated from the airplane. The airplane continued on a descending, turning flight path until it impacted terrain. A postimpact fire ensued.The wreckage path was about ½-mile long and contained three distinct areas of debris. The first area contained the lower half of the rudder. The second area contained the vertical stabilizer, the rudder balance weight, the left horizontal stabilizer, the left elevator, the left wingtip, the left elevator balance weight, and the cockpit canopy—all of which had separated from their mounting locations. The third area contained the main wreckage (the fuselage, engine, and wings), which struck the top of a tree, fell to the ground, and came to rest inverted. Examination of the wreckage revealed no evidence of an inflight fire, explosion, flight control failure, bird strike, or any preexisting structural anomaly.Review of the airplane’s design revealed that at an aerobatic gross weight of 1,600 pounds, the airplane complied with the +6/-3G standards of the FAA’s aerobatic category.

It had a maximum maneuvering speed of 124 knots and a never exceed speed of 200 knots. At the time of the inflight breakup, the airplane was traveling 20 knots above the published never exceed speed.A friend of the pilot noted that he had seen the pilot recover after falling out of a maneuver at low altitude before, and that it was not uncommon for the pilot to sometimes fall out of a maneuver (loop and/or roll). Review of a video taken by his friend revealed that, during that flight, the pilot performed a left roll. During that maneuver, the pilot allowed the nose to drop and the airplane lost approximately 1,000 feet of altitude.

The accident airplane’s abrupt and sudden maneuvering, which exceeded its design limitations, is consistent with the pilot’s loss of control after attempting an aerobatic maneuver.

The NTSB used a video from Vladyslav V. Karpayev (known on VAF as "Vlad") in making its determination. In an early flight, it showed Kelly allowing the nose to drop, losing approximately 1000 feet in the maneuver.

In its report and accompanying 23-page structural analysis, it noted that there was no evidence of previous damage, and that a service bulletin from Van's on cracks on the elevator showed no evidence of any problem in this area, proving that, despite speculation at the time, the SB was unrelated to this accident. 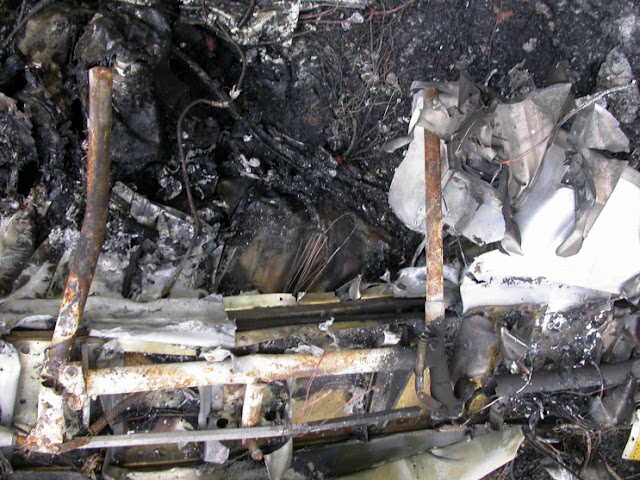 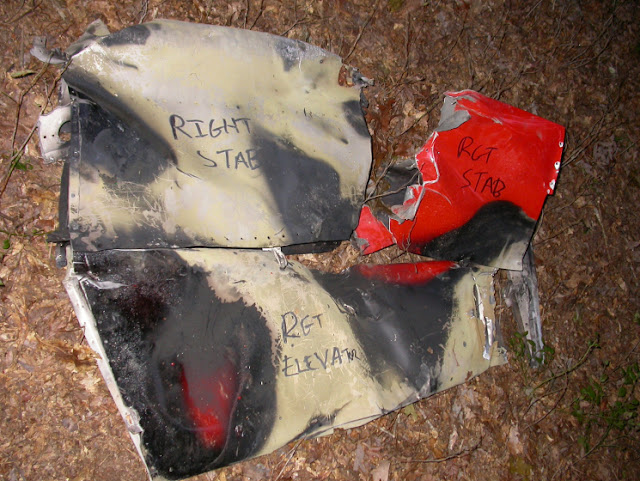 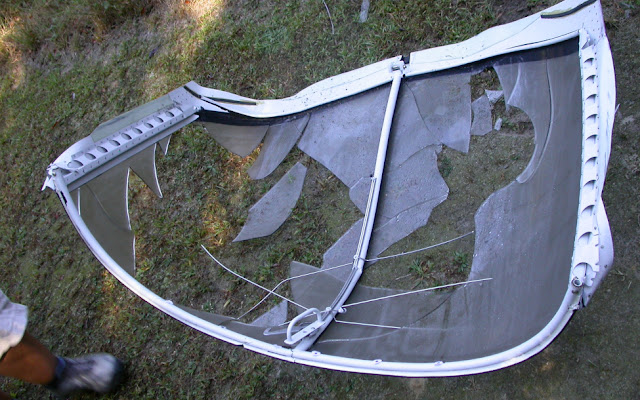 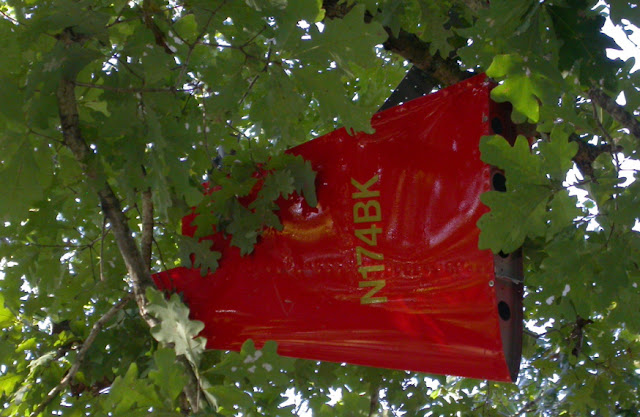 Posted by Bob Collins at 9:53 AM No comments:

An RV takes us to Rockabilly 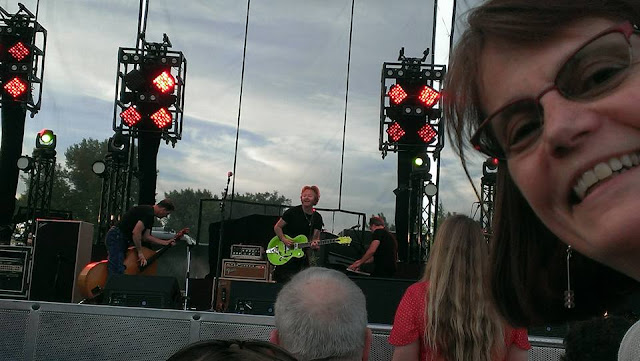 As much fun as I've had with the RV-7A since its first flight three years ago Saturday, I haven't been able to share it as much as I would like with my wife.

She's not much of a flier. She's been game a few times -- a hop to Madeline Island, a picnic on Lake Superior, chili in Rushford, and a Trampled by Turtles concert in Mankato -- but that's pretty much it. She doesn't have her "sea legs" where flying is concerned and I'm not one to force her. I thought of that as I flew back to Massachusetts a few weeks ago. It was pretty rough over Ohio. For some reason it's always rough over Ohio.

I was alone; she had taken a commercial flight the day before, and I kept thinking, "if anyone was with me right now, they'd never fly again."

For many spouses, the joy of flying isn't shared, so we have to remember that at its basic reason to exist -- an RV airplane gets you somewhere.

Last Friday, "somewhere" was Redwood Falls, Minn., which is pretty much in the middle of nowhere. But there's a casino there -- Jackpot Junction -- and when our favorite -- Brian Setzer -- and George Thorogood teamed up for a summer tour, I quickly bought tickets last February and ended up center stage, fourth row on the aisle. 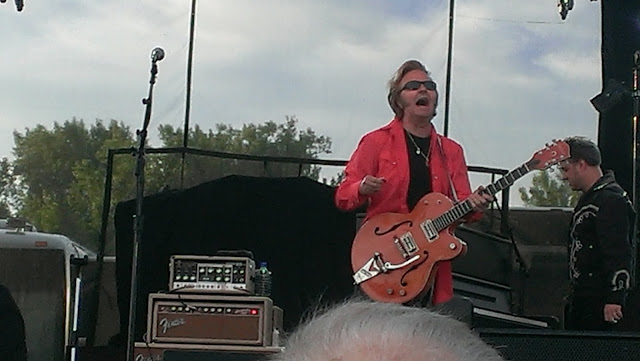 Because we both had to work on Friday, driving was out of the question. It would be three hours and the concert started at 8. Besides, I have this airplane, you know.

I waited too long to reserve motel rooms but was able to find one at the cheapest joint in town, which also happens to be right next to the airport.

The flight out was bumpy, as befits an 80-degree day in Minnesota. Some noise on the radio, which first surfaced when I was giving airplane rides in North Adams, Mass., a few weeks ago returned, much to both of our consternation.

We took off at 5:30 and landed at 6:15, walking about a mile to the motel -- maybe less so as there's no fence around the airport so we cut through the farm implements dealer's lot.

The motel never got our reservation, or said he never got the reservation. And there were no rooms because the bird flu epidemic has brought dozens of workers into the region to fight it.

But he let us drop our luggage and we hopped a casino shuttle. Shortly, we were living the good life.

The concert ended around 11 or so, so we hopped the shuttle back to the motel, picked up the suitcase we'd planned for our overnight, and hoofed it back to the airport. It was a nice warm night and a pleasant walk.

We were both pretty tired but I filed for a 12:40 a.m. takeoff, pulled up the tie-downs, and patrolled the runway for deer. 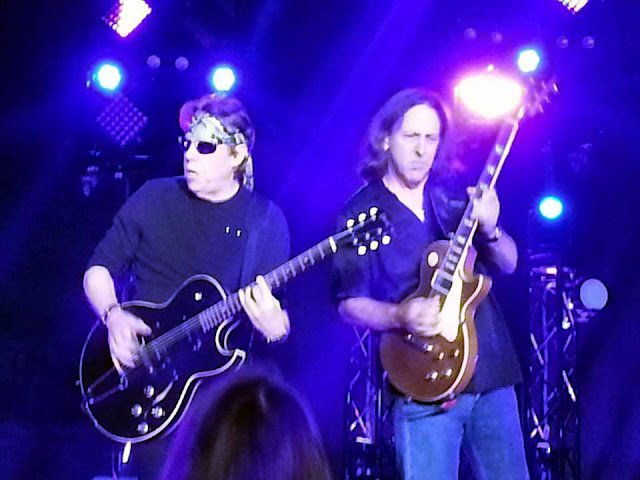 I wasn't happy at all with the run-up; the mag drop was more than I'm comfortable with. I got it down to about a 70 RPM drop and that would have to do. There was no moon, but I was comfortable I'd be able to maintain something of a horizon, especially with the Tru Trak autopilot.

It's a big, black hole between the outskirts of Minneapolis, with a few towns in between. A loss of an engine would be bad news; I couldn't even pick out a highway.

I couldn't get the cylinder head temperature below 390, no matter how much I leaned. But the engine was otherwise performing fine and I considered asking Minneapolis Approach for permission to enter Class B and go over the top of the big airport. Why not? There was nobody else in the air and nobody on the radio. But I didn't, landing back at South St. Paul around 1:30, my wife actually clapping as I settled onto the runway. Yahtzee!

We were back at the house by 2, a whirlwind tour that reinforced the value of an RV airplane.

Post script: On Saturday, I diagnosed the problem as coming from the passenger headset. I swapped out another pair and the noise disappeared. What was going on inside there, I don't know. But I've wanted to give the passenger the same comfort I have, so I've ordered another set of Lightspeed 2 headsets.

On Sunday, I monitored the GRT EIS 4000 and saw something odd. The EGT (exhaust gas temperature) on the #3 cylinder would be much lower at idle, although it would come back to a proper level once the throttle was pushed in. 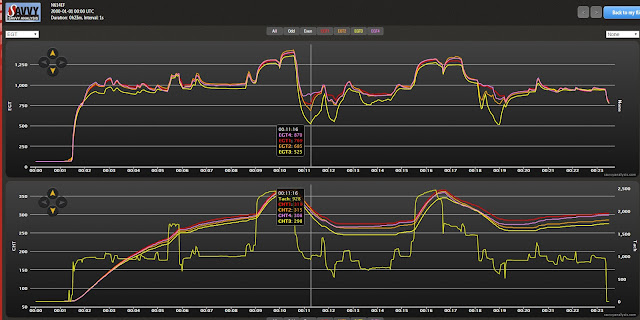 Is this a problem? I don't know. I've sent the data off to Savvy Analysis to see if this is at all indicative of the early stages of a stuck valve. I'll let you know.
Posted by Bob Collins at 2:48 PM No comments: