A few days ago, I posted this picture: 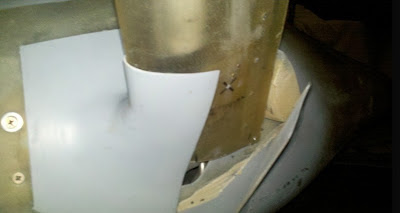 The lower intersection fairing -- the back half -- on the right side had ripped away from the wheel pant fairing. It was a fairly violent destruction because further inspection revealed it didn't rip off along the bonded portion -- that is: a delamination -- it ripped clean across the fairing (these are the fairings sold by Cleaveland Tools).

What caused it? My RV friend, Ted Chang, figured it out and it makes perfect sense. The rear half sits up slightly from front half (it's pushed out a little by the shape of the gear leg fairing) and the 170 mph breeze caught it and ripped it. That makes perfect sense, though I'm surprised it didn't happen on the left side first because that side was set up worse than the right side.

What to do? Ted provided the perfect solution with this drawing he sent me on Facebook. 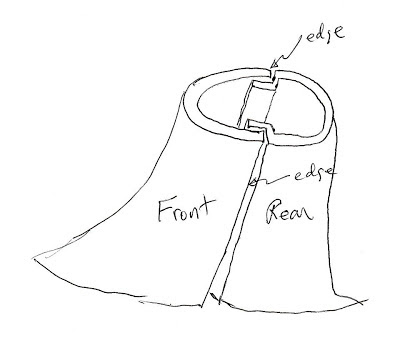 His "slot" will hold the front and back together.

So I've attached the wheel pants together, put some packing tape along the inside of the front part of the fairing, and laid up several layers of fiberglass. 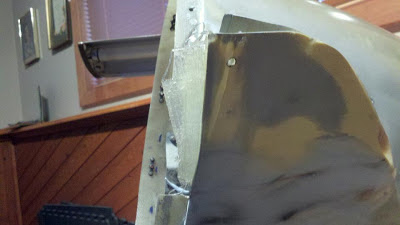 When the epoxy cures (it cured enough to allow me to take the front half of the wheelpant off), I'll trim the "clip" (basically, a beveled edge, similar to how the wheelpants are held together) to about 1/4 to 1/2 inches. I don't think I'll need to do the same thing to the top of the fairing because (a) it mates much better as is and (b) the top of the fairing -- because it's shorter -- is much more rigid than the bottom.
Posted by Bob Collins at 9:01 AM No comments:

The National Transportation has released a probable cause of an accident that killed Randolph Flores of Palominas, Arizona in Jordan, UT in September 2011.

According to the NTSB, the RV-6A pilot was probably trying to avoid birds when he entered the traffic pattern to land.

While approaching the airport at the conclusion of a 4-hour flight, the pilot announced his intention over the common traffic frequency to join the traffic pattern. A short time later, an undiscernible distress transmission was made over the frequency. A few seconds later, the airplane was observed spiraling to the ground. Global positioning system data recovered from the airplane revealed that it was traveling at an appropriate airspeed for entry into the downwind leg of the traffic pattern with a sufficient margin above the stall speed to maintain flight. It then made an abrupt left turn, resulting in a spiral dive, which progressed into a spin. A postaccident examination of the airframe and engine revealed no evidence of mechanical malfunctions or failures that would have precluded normal operation.

No evidence of a bird-strike was found, and review of radar data did not reveal the presence of other aircraft in the vicinity just prior to the accident. However, radar data did reveal that the airplane passed through a cluster of primary targets (with no altitude information) at the time of the accident. Such primary targets could potentially be radar system anomalies, thermal air currents, or bird reflections. According to a bird mitigation specialist, large birds, or flocks of smaller birds, are often present at that time of year, and such birds typically fly circling patterns in thermal air currents at traffic pattern altitudes.

The pilot’s abrupt maneuver during the approach was consistent with an avoidance maneuver. The maneuver, which was calculated to be a 65-degree angle of bank to the left, most likely placed the airplane into an accelerated stall condition, which developed into a spin.

The airplane was loaded toward its aft center of gravity limit, which could have increased its pitch sensitivity, thereby exacerbating the turn. A successful recovery from an unintentional stall-spin at pattern altitude is extremely unlikely.

This crash was particularly noteworthy at the time because it almost hit an elementary school.

This is a good time to consider stalls and load factor:

Now that I've gotten the Reiff preheater system installed, I went flying yesterday even though the temperature was -12C. I wanted to do some cold weather testing and find out how cold it can get before the pilot of N614EF needs to land and warm up.

I also wanted to see if changing a configuration setting on the Garmin 296 would fix the problem I'm having with my TruTrack Digiflight (single-axis). It doesn't want to follow the Garmin flight plan, even though it's getting solid data. Bottom line: It didn't.

After I landed, I noticed this...

I did notice recently that the rear seamline had started to split. I think the gear leg fairing was being pushed into it and so it was acting like a putty knife. I'm not sure that accounts for the ripping off the fairing. I did, as you can see, split the wheel pants along the seam, but the rear part of the intersection fairing was not sitting proud and, thus, exposed to the airstream. Ironically, the left side intersection fairing is sitting in that fashion.

It's -6 (F) this morning, so I'm going to pull everything off and bring it home to a warm house for evaluation.
Posted by Bob Collins at 8:45 AM No comments:

The day EAA put a warbirds owner in his place

Over on the EAA forums (which are good,by the way), the monthly "we want the EAA the way it used to be thread) had broken out again, as it usually does every month when Sport Aviation arrives in the mail and every single article doesn't appeal to some member.

But, hey, can we get a little love for EAA over here. And some for Jack Pelton, the interim president.

A warbird owner has been rebuffed by EAA in his attempt to have EAA pay him to bring his plane to Oshkosh, a perfectly abysmal precedent and the fastest possible way to ruin AirVenture.

AvWeb has the whole story.


Pelton was commenting on a decision by Fighter Factory President Jerry Yagen to have his exceptionally rare Second World War demonstration aircraft steer clear of the big show this year. Yagen is now lining up dates for his recently completed Mosquito fighter bomber and a new-build version of an Me. 262 jet fighter but he says he won't bring them to Oshkosh unless EAA pays him to do so. Yagen told AVweb he believes other warbird owners feel the same as he does and some will also boycott the show. "Sorry to say that the days of bringing such expensive airplanes all across the countryside for free will most likely not happen again," Yagen said. He said he thinks there has already been a perceptible decrease in the number of warbirds at AirVenture and that it will escalate. He also said he doesn't think AirVenture should pay for all warbirds to attend but that there should be compensation for aircraft like the Mosquito and Me. 262 that will be major drawing cards to the event. Pelton said Yagen's request is not only financially impractical, it would require EAA staff to perform the impossible task of determining which aircraft warrant funding.

We'll get along just fine without you, sir.

Baby, it's cold outside!

When I was renting airplanes, I didn't give two rips about starting an engine in sub-freezing temperatures. It wasn't my engine.

Now that I'm flying my own airplane, and now that I've had to relocate to an unheated hangar, I care. A lot.

So other than a circuit around the pattern prior to moving the airplane from the old hangar to the new one, I haven't flown much, and I don't want to start the engine until it's equipped with a preheating system.

I tried to rig up a cheap one, but you can't find a good functional ceramic heater anymore with a metal shell. All the ones today are plastic shells and they're also tapered and sleek, lousy for screwing on a duct adapter and some ductwork to pipe into the exhaust opening of the cowling for preheat.

After some investigating, I ordered a system from Reiff Preheat Systems. It consists of four bands which, using worm clamps, clamp around each cylinder, and a heated element that is bonded onto the bottom of the oil sump.

Today I set about installing it.

The cylinder bands went on fine, but it's a bit of a struggle to get the system to fit if you have a Lightspeed coil on the top of the engine, as well as a fuel injector spider sitting up there, too. The heating element wire from the #4 cylinder is going to be too short. Drat! 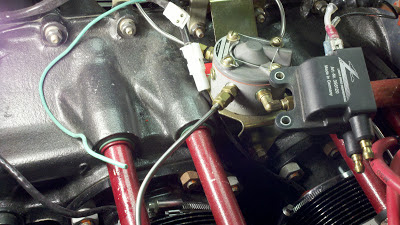 The harness goes along the top of the engine block, which is a problem because of the Lightspeed coils, which I removed for a little elbow room. I'll try to clamp it to the case bolts with offsets and Adel clamps, but it's going to have to take a sharp turn to avoid the coils and, more important, the stainless lines coming off the fuel spider. I'm not crazy about it. 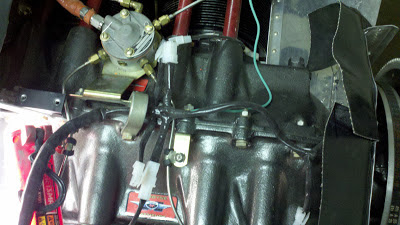 Meanwhile, work progressed on the oil sump. I used paint removing, a scraper, and some stainless steel to remove and prep all the paint on the bottom of the sump. 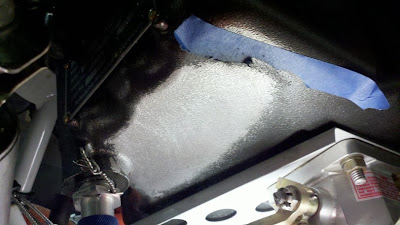 Then I mixed up the supplied epoxy -- it looks like a JB Weld type of product -- and attached the heater element, the wire from which will snake up the back side along the engine mount, through the baffle and attach to the harness.

Now it has to cure, which is a problem because, well, it's cold. It takes 24-48 hours at 75 degrees and goodness knows how long it'll take at 30 or so degrees in an unheated hangar.

But, it's not as if there isn't more work to do. The wheelpants all need to come off because snow is packed up inside them from taxiing over to the new hangar.

I don't know when I'll fly again.
Posted by Bob Collins at 10:46 PM No comments: