It took a few months longer than I'd hoped-- hey, it's cold in Minnesota and you can only breathe so many kerosene fumes from the heaters! -- but the annual condition inspection has been completed. The goal has been to slowly move the annual date to the middle of winter from its original June so that I can have the plane "grounded" when I'm not likely to fly anyway. Mission accomplished.

I didn't find anything serious during the inspection, but a few weeks ago, I did find more oil in the cowl than I care for.

Some comes from the oil screen plug, which has a particular torque value that always seemed too low. It's something like "finger tight and 135 degrees," or something.

But it's hard to find the source of the drips because the oil flies all over the place in the cowling once it's pressurized by ram air.

For example, this is the picture of things a few weeks ago when I first started exploring: 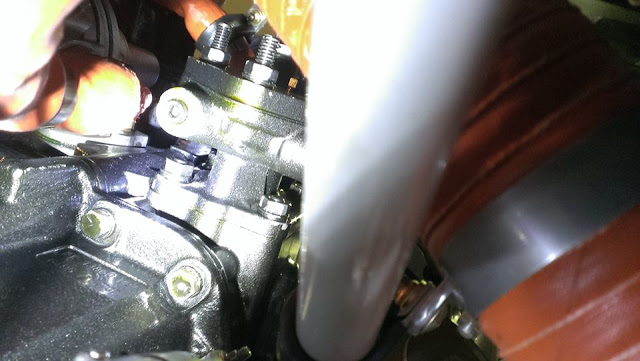 But then Dan Baier had a suggestion. Clean up the engine and wipe off the oil, and then spray things with a foot powder. So I did. I waited for it to dry -- it provides a "white" cover -- then took the plane out to the ramp and ran up the engine for 10 minutes.

This is roughly the area: 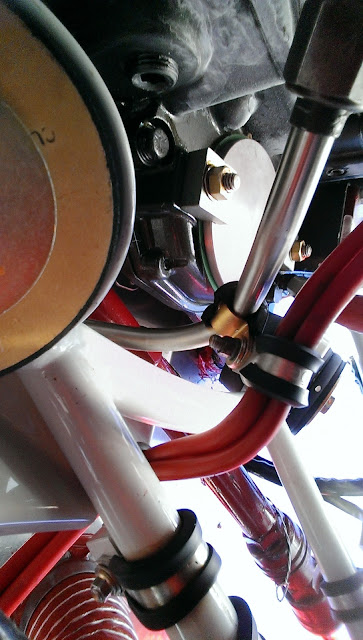 I should point out that the worst thing I ever did was what everyone suggested I should do: put a "whistler hole" in the oil breather tube. It spits out oil (and water) which gets everywhere. It's nearly impossible, it seems, to get the tube itself to drop it drips on the exhaust stack (where it would burn up) because of the engine mount which gets in the way.

I suspect there's also a problem -- well, not really a problem -- that with this engine, if I fill to capacity (about 8 quarts) with oil, it immediately pukes a bit of it overboard. I've heard that's the case with a lot of airplane engines.

I did find one area of concern, and it's the case. Here's a shot from the front. 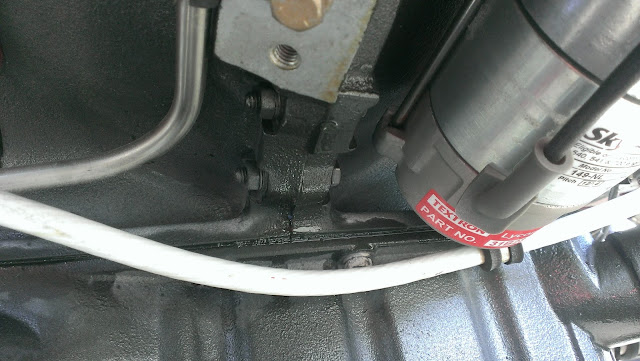 You can probably see a little oil coming out near where that bolt and nut are. That would account for the occasional drip of oil I see in the front of the engine.

Now, the problem here is it's pretty impossible to get wrenches on either one of those locations, although I did and gave it a little tug; it was pretty snug.

A check of the rest of the engine did not reveal anything suspicious, so I put the cowling back on and took her flying for the first test flights post-inspection.

Afterward, I just looked in the back of the bottom cowling and saw a few drips of oil directly under the oil strainer and the usual mess around the breather tube, including drips of water. I hate that breather tube!

I also determined that what I thought was oil running down the gear leg when I first started the firewall-forward inspection, was probably avgas, coming out of a small drain hole I made in the filtered air box. I've always gotten fuel drilling in there -- possibly after shutdown or from overpriming. Even after 175 hours, I'm still learning things about what makes the engine happy with starting and I see this as a lessening problem.

But the oil drips cause me concern anyway because I don't really know the difference between routine and worrisome. Airplane engines are dirty things. Beautiful. Just dirty.

But at least mine doesn't have athlete's foot.
Posted by Bob Collins at 9:54 AM No comments:

Rutan back to Oshkosh

Have I mentioned how much I love the new EAA since Jack Pelton took over?

No? Oh, well an announcement from Oshkosh tonight reveals another step forward in an attempt to clean up the mess created by the previous EAA administration and its imports, who alienated just about everyone in aviation not worth alienating.

Burt Rutan, the visionary aircraft designer whose innovations made history and changed the aviation world, will be back at EAA AirVenture Oshkosh in 2015 to commemorate the 40th anniversary of his iconic VariEze aircraft.

Rutan’s designs have been groundbreaking for more than 40 years, beginning with the VariViggen in the early 1970s through the concepts that became the SpaceShipOne and SpaceShipTwo vehicles that are launching the era of space tourism. His use of canard wings and composite materials changed the look and efficiency of homebuilt aircraft, with more than 1,000 airplanes based on his designs now flying in the U.S. alone.

“There are few individuals in the history of aviation who can match Burt Rutan’s imagination and accomplishments,” said Jack Pelton, EAA chairman of the board. “His presentations are eagerly anticipated whenever he is in Oshkosh. Although he officially ‘retired’ several years ago, his innovative mind continues to push forward with new concepts and ideas that he’ll share at EAA AirVenture in 2015.”

Why is this significant? Because a few years ago, according to legend, someone high-ranking in aviation -- as Robert Goyer of Flying Magazine notes -- said Rutan is a "failure" and questioned why anyone would write an article about him.

The only thing I can come up with is perhaps that Rutan's impact on the certificated market has been minimal compared to his huge successes elsewhere. The Starship was a commercial failure, to be sure, though its small base of owners loved it out of all proportion to its overall sales figures. At some stage of their development, Rutan had an impact on the design of a few other certified or to-be-certified airplanes, including the Eclipse, the Visonaire Vantage and others. Moreover, the impact of Rutan's thinking on the thousands of engineers who daily apply their Rutan-inspired judgment in the crafting of the next generation of airplanes is impossible to calculate.

In terms of achievements, all Rutan did (in no particular order) was successfully design a private spacecraft and launch system, single-handedly invigorate the homebuilt aircraft movement, popularize the use of composites in aircraft design, dream up an airplane that successfully flew non-stop and unrefueled around the world, and create a worldwide intellectual aerodynamics movement that is vibrant and active to this day. And I'm leaving a lot of good stuff out. A lot.

The rumors around Oshkosh in recent years was that Rutan got wind of the comments and was justifiably upset, so much so that former EAA boss Rod Hightower released this statement at the time:

"EAA, and all our staff, have the highest regard for the legendary Burt Rutan and his incredible career. His many contributions and achievements – from being named one of Time Magazine's “Most influential people in the world” to his being awarded the Lindbergh Medal, and dozens of other aviation and business honors – show that Burt Rutan is a man of achievement who embodies the American spirit and all the good it reflects."


Maybe Rutan has been around Oshkosh since, maybe not. I haven't seen him since the White Knight was at Oshkosh before all of this broke.

No matter. Rutan is return to Oshkosh and Pelton and the gang are putting the EAA back together the way it once was.

Posted by Bob Collins at 9:23 PM No comments:

If I could do it over again, I might consider being a pilot at Kenmore Air in Seattle.

Or I'd be Brady Lane of the EAA.

Posted by Bob Collins at 2:04 PM No comments:

The approach to St. Maarten

If you're an aviation fan -- and why would you be here if you weren't? -- you've probably seen videos and pictures of the arrival end of Runway 10 in St. Maarten. It's where the jets pass just a few feet above a crowded beach.

What does it look like from the cockpit of a 747?

KLM has just posted a video with the answer.

A beautiful huge baby-blue KLM 747 used to fly into Minneapolis St. Paul back when Northwest Airlines ruled the skies overhead. It was a spectacular time every Sunday afternoon when it departed. I haven't seen it in years.
Posted by Bob Collins at 10:49 AM No comments:

Don't take selfies when you're flying at night 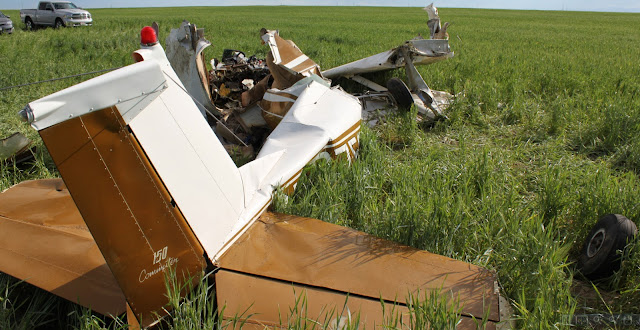 It's hard for anyone who has flown an airplane to understand the jaw-dropping foolishness documented in a National Transportation Safety Board report that blames a Colorado plane crash on a pilot taking selfies, according to the Denver Post.

Amritpal Singh, and his passenger were killed when their small plane went down near Watkins, Colorado last May 31.

In its probable cause report issued last week, the NTSB said...

An onboard recording device (GoPro) was found near the wreckage and the files were recovered. Based on the available information, it is likely that the GoPro files were recorded on May 30 and May 31, 2014, with the final GoPro file recorded during the 6-minute flight in the traffic pattern. The accident flight was not recorded. The GoPro recordings revealed that the pilot and various passengers were taking self-photographs with their cell phones and, during the night flight, using the camera’s flash function during the takeoff roll, initial climb, and flight in the traffic pattern.

Some news organizations are reporting that GoPro footage showed that just before it crashed, the pilot was taking a selfie. That's incorrect, as the NTSB noted.

The actual report from those analyzing GoPro footage (available here)from the camera in the crash didn't really provide any evidence that when the pilot lost control of his plane, it was because a flash went off and blinded him.

In fact, none of the video footage recovered was from the doomed flight, so there is no proof of the NTSB's conclusion.

But the NTSB found other videos on the camera from a flight just before the flight which crashed, which it said shows a "pattern of behavior" by the pilot. 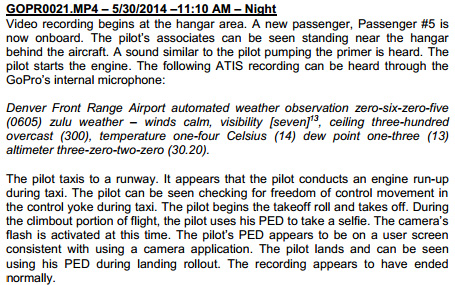 The crash occurred on a flight an hour or so later. The pilot was in the clouds, and couldn't tell which way was up. He was an instrument-rated pilot and should have been able to rely on the plane's instrumentation, but instead he climbed, lost airspeed, and the plane lost lift and spiraled to the ground, killing the pilot and his passenger.

The NTSB is doing something here it normally doesn't do: guessing that the pilot was blinded by taking selfies and unable to see the instruments.