There'll probably be the usual amount of anti-media braying about the media treatment of experimental aircraft following the weekend USA Today story (from the Detroit Free Press) about the NTSB probe into why experimentals are crashing at a greater rate than certified airplanes.

But did you notice how Detroit Free Press treated the story? They started it with the perspective of a homebuilder. A real, honest-to-goodness builder of airplanes! Someone somewhere was smart enough to develop a relationship with a reporter so that when a story came along, the perspective of the builder dominated it. (We know it wasn't you, AOPA!)

The hand-built biplane pilot Bob Richards brought to an air show in a neighboring county Sunday is the type of aircraft that has come under scrutiny by federal safety officials studying the accident rate among amateur-built planes.

Tom Vukonich of Metamora, Mich., tries to determine the best way to install a rod into the fuselage of the biplane that he's building.

Richards, 41, of Joliet, Ill., once glided another hand-built plane down after the engine quit because the person who built it wired the battery wrong.

Yet he doesn't worry about his safety in a hand-built plane. "There are a lot of accidents that don't have anything to do with how it was built," said Richards, noting pilot error, weather and the difficulty of flying high-performance planes.

I presume some people will kvetch that the paper did the story at all. But the truth is that the NTSB is looking into it, and homebuilts are going down at a fairly high rate.

We could save a lot of kvetching if we simply fly better and smarter because, it's true, they don't usually crash for structural reasons.
Posted by Bob Collins at 10:56 PM No comments:

I'm kind of a neat freak and I don't care much for dust, so it's rather odd that I once considered building a GlaStar, a plane that is all composite with metal wings. It would have required lots of chemicals and lots of sanding. And lots of dust.

After I sent my deposit in on a GlaStar kit, the company went belly up, so I bought an RV airplane kit instead.

But there's plenty of fiberglass work on these things, too. I'm knee deep in it. I still have plenty of fairings to construct, but first I need to finish the cowling, which I actually started almost two years ago.

All the fitting is done now, of course, and the cowling is being prepped for an eventual paint job. With fiberglass, there are thousands of pinholes which will show up as soon as you finish that $5,000 job. You have to get rid of them first.

My technique worked well on the top cowling, so there's no reason to change the bottom cowling portion. The first step was to thin some epoxy with acetone and brush it on, after a good sanding with #80 grit sandpaper. 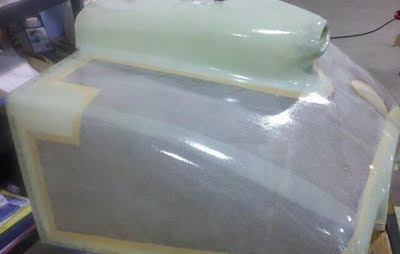 Sure, it looks all shiny and stuff, but don't let it fool you; it's full of pinholes. Some of them, hopefully, will be partially filled.

The next day -- yesterday, actually -- I sanded it all off with more #80 grit. Then I mixed up the two-part SuperFil, spread it on and squeegeed it off, except for the small part that filled in the pinholes. 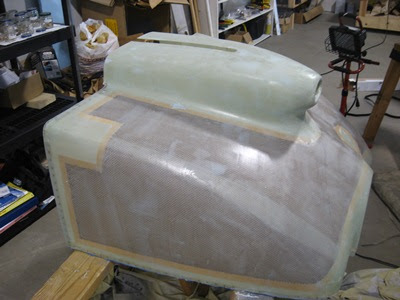 Then this evening, I sanded that all off -- yep, #80 grit -- and opened up an almost-empty can of Super Prime, which is a VERY weighted primer filler that you roll on. It'll fill in, hopefully, most of the pinholes that are left. 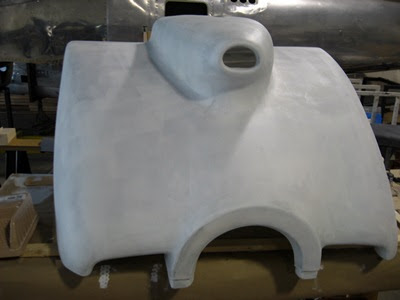 I'll sand this all off, too, and then add three more coats and sand it with #180 grit and it should be ready, then, for a nice epoxy primer. Unfortunately, I probably don't have enough left, and it's $60 a quart. I got in the wrong business.

None of this will be done until September, apparently. We're heading out on a vacation back to New England.

Oh, I also installed the fuel overflow tube today. That should be the last item to be installed on the engine. We're ready to go through the process of starting the engine for the first time.

Posted by Bob Collins at 7:54 PM No comments:

Email ThisBlogThis!Share to TwitterShare to FacebookShare to Pinterest
Labels: Cowling

The Oshkosh video everyone waits for

Oshkosh doesn't end until the guy who annually produces the finest video about it says it's over.

Email ThisBlogThis!Share to TwitterShare to FacebookShare to Pinterest
Labels: Oshkosh

Everything but a homebuilt

I didn't get to Oshkosh this year and, frankly, I didn't hear a great deal of excitement about Oshkosh this year. In the weeks after AirVenture, you usually get a lot of complaints that the EAA isn't about homebuilders, anymore. This year is no exception. You can set your watch by the outbreak.

Personally, I don't much care. Oshkosh is big enough to find whatever interests you -- homebuilts included -- and what we're really talking about here is validation from the organization, an indication that homebuilders matter.

Here's a quarter. Call your therapist.

By the way, Slick Hutto, who produces the definitive Oshkosh video each year, says this year's version is only a few days away.
Posted by Bob Collins at 11:39 AM 2 comments:

I posted this picture on Facebook the other day. It's the safety wiring of the bolts that hold the filtered air box top plate to the fuel servo. Pretty, eh? 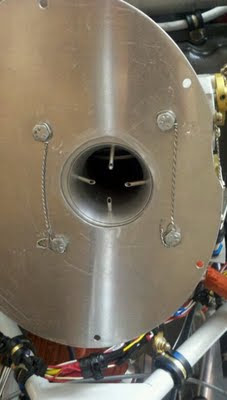 When I was doing this, I was referring to AC 43.13, the so-called "bible" of building and maintaining an airplane (order yours today!), specifically this page. 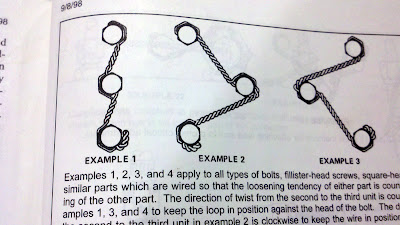 In fact, I was holding the page up to the plate as I figured out how to properly secure it. Compare: 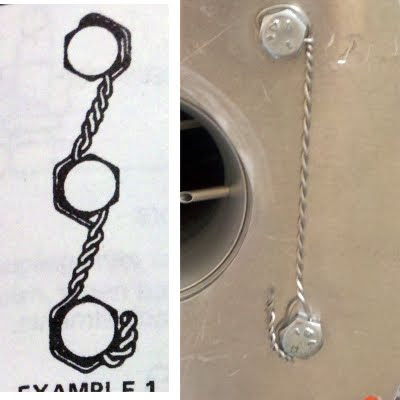 The problem is: I'm not seeing much of a difference there.

I mention this because one of my RV-building buds sent me a note on Facebook.

Take a look at http://scootermcrad.blogspot.com/2011/04/how-to-safety-wire.html for some great examples of what it should look like.

It is definitely an art to figure out how to safety stuff properly. It shouldn't take you very long to redo those 4 bolts since they are extremely accessible. I learned from a local builder showing me the tricks to safetying. It sure was a lot easier to get some tips and tricks from him rather than my method of trial and mostly error!

I know he's probably right because he's highly regarded as a good builder, but I'm not seeing what it is that's different in the photos above and I presume he hasn't been on Facebook lately to see my return query.

So I am missing something really important here. But what is it?

Update 8/10/11 It should've looked like this. Many thanks for all of the advice. 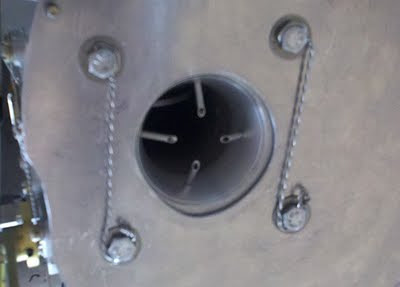 It's been quite awhile since I last produced a Cowling Chronicle, detailing the very long process of the fiberglass portion of firewall forward. In this latest episode, I tackle the final part of installing the filtered air box, the "tunnel" to create a smooth flow of air from the "snout" in the chronicle to the air box which filters the air into the fuel servo.

Once this process is done, and with a little wiring to be completed, I'm pretty close to firing up the engine for the first time.

In the meantime, I'm working on the cosmetic part of the top cowling, which is filling pinholes and sanding primer.

Many thanks to the people on Van's Air Force for helping getting me started on this particular aspect of the project. The directions are such that they make perfect sense once you do the project and go back and look them, but they're pretty to visualize when you're trying to get started. So I hope this helps builders who find themselves in this position.