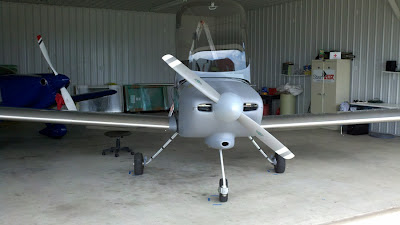 Although the first few hours of its life have been beset by some "inconsistencies," the good news about the flight testing of N614EF is that I know my plane.

I knew months ago that the engine didn't sound quite right, even though I'd only been in it for a few minutes when it did. Even when Tom Berge flew it down to Airlake a couple of weeks ago, there was something about the way it started that day that I didn't like.

The last week or so has also had me thinking there's more to this engine than it's given me so far and Friday afternoon's "hello, are you going to listen to me?" notification solidified that.

I spent most of Saturday afternoon trying to find the cause. I took the fuel servo off, cleaned it out and replaced gaskets where it mates to the engine and throttle/mixture cable brackets. I cleaned filters out, and yet I could find no cause of the engine's obvious problems.

Then Stein Bruch -- he's letting me use his hangar -- stopped by to chat about it. He didn't think it was an induction leak because it didn't present itself until well after the engine had warmed the other day, and we were fairly confident it was getting a good spark, and that left only the fuel system.

But the search came up empty until we tried the last thing we could try: the fuel injectors. They're the small nozzles at the top of each engine cylinder that inject the fuel into the cylinder for burning.

Sure enough, when we dismantled one and looked into the tiny nozzle, it appeared blocked. Stein used a small piece of safety wire to poke out something that appeared to be SuperFil fiberglass fill. How it got there, I haven't a clue. It couldn't have gotten past the filter screen on the fuel servo, which means it must have been in the hose that goes from the fuel servo up to the "spider." From there it travels by small stainless steel hoses to the fuel injectors and into the cylinders.

I spent Saturday night putting things back together and started it up in the dark. It sounded fine, better than it has -- more like the engine I remember. But, of course, you never know until you get in and take her up.

It was fairly busy at the airport. There was a Father's Day fly-in at Stanton Airport, a few miles away, and it was a nice day. So I counted the planes in the pattern, including one apparently transitioning, I picked my spot, and off we went...and we went!

"Looking good, Collins," someone radioed as I climbed.

It was Warren Starkebaum, my best RV-building friend who flies out of Crystal. He's been building almost as long as I have. He and his wife were at Stanton and he flew over in his Cessna, just to see if I was around, when he saw me taxiing. He was the "transitioning" airplane I saw.

I announced on the frequency that I intended to climb to 3,000 feet over the airport (that sits at 960 feet) and I was there by the time I was partway down the downwind leg.

Looking across the sky, I saw Warren up there, too, even though I didn't have any idea it was Warren.

The engine was operating great, showing me a power I hadn't see before.

At the height of it, I got 2538 RPM, although I should've paid more attention to the cylinder head temperature and I'm still not sure why it wasn't flashing the alarm, but it didn't. When I finally noticed it, it was at 416 degrees. So I pointed the nose down and it cooled fine.

The oil temp never got above 190 and that was on final. Most of the time it was around 175, and when the cylinder head temperature on #1 was burning its hottest, the oil was only at about 169. I've got a big oil cooler on this thing. But am I thinking too much when I say this is, err... interesting?

The air temperature dropped to 72 and it wasn't hard to figure out why. A thunderstorm was approaching the field. I departed southeast (along the corridor to the test area), to drop down to pattern altitude for a 45 degree entry to runway 12. As I turned back to the airfield, an RV (yellow and white, painted like Van's RV-9), scooted across in front of me, just a few hundred feet below me, heading west. I assume he was coming out of Stanton, but I was in no position to see him until it was too late. I'm hoping he saw me. I've got to order the Zaon right now! (Observation: I tend to think the safest place to be if you're going to transition near an airport is OVER the airport, above pattern altitude. And also be on the airport frequency. Maybe this person has a good traffic alert system. I sure hope so.)

I made a perfect crosswind landing -- that's right, I said "perfect." I've made fabulous landings in this thing -- then saw Warren in the ramp area, motioned for him to follow me and we had a great chat about his RV project, his backyard project, and the fact Medtronic laid him off after 29 years.

"I'm anxious to build," I said, "just leave me the keys to the hangar."

He's a great guy and it was a great happenstance to have him and his lovely wife share in the flight, short as it was (about a half hour).

Clearly, I need to work on the cooling on that #1 cylinder and cut that baffle dam down a bit.I'm concerned about having the CHT be over 416 on the flight, but the plane has been using very little oil and a few A&P friends have suggested that the engine probably was "broken in" (the piston rings seated) during the test runs that Mattituck ran after its construction, or perhaps in the 5 1/2 hours of flights on it in the last few weeks.

It's hard to know -- other than oil consumption -- when to say "it's broken in," and I'd like to remain around the airport before I head off to the test area for speed tests etc. I'll try it again in a few days, perhaps after I drill off that air dam on the #1 cylinder.

I had also done a little work on the heavy wing. It's much better. Not perfect, but I haven't yet fully configured the plane for testing the heavy wing, either.

The stiff throttle cable turned out to be not as bad as feared. The throttle linkage itself is a little bit stiff, and a repositioned spacer on the linkage assembly made for just enough of an offset in the travel of the cable to make it move easier.