Ted's plane and 'the voice'

RV-building acquaintance Ted Chang had his first flight last week in the RV-10 he built.

Today, Ted reported on Facebook, he had an in-flight fire, four miles from the airport and had to make an emergency landing. 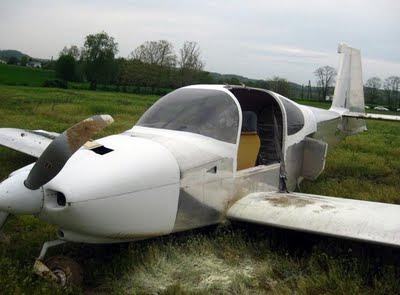 It's a testament to Ted's flying ability that he was able to land safety. But as a builder it sure gives me pause. Am I up to responding to a similar emergency? Am I building properly? Is that fuel line too close to something?

There's still a long way to go before my plane is finished, but there is a creeping doubt that is making its voice heard.
Posted by Bob Collins at 1:51 PM 2 comments:

The baffle project is like driving in traffic: Stop and go. After about 70 hours of work, it gets pretty tedious.

But the baffle work is primarily done on N614EF and over the weekend I cut the oil cooler bracket out and fabricated all the strengthening mechanisms on the outside corner, which seems to be the area that cracks. It took many hours to get it just right, so I was excited on Sunday when I fit it all back onto the plane. 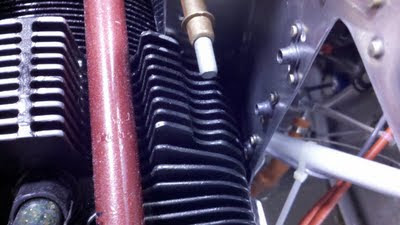 As you can see the bottom nutplate is hitting the cooling fins on the cylinder. This is not good, and certainly not acceptable. Moving the cooler higher isn't an option because it'll impact the cowling and the engine mount tube. 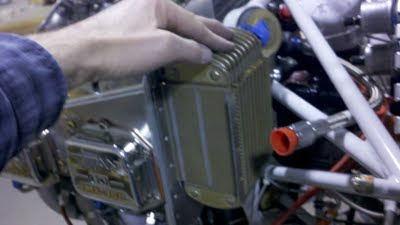 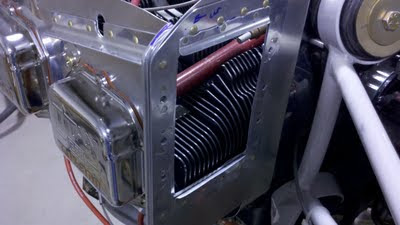 I've made a lot of good progress on the plane lately, but this has stopped everything in its tracks while I figure out what to do. Griding some of the cooling fin away? No, I don't want to do that to a perfectly lovely engine.

Move the cooler? Maybe, although I don't think the firewall has a lot of options to it at the moment.

One idea I'll consider is maybe adding another spacer -- it'd have to be almost .250 I would think -- to the outside corner, cutting the flange of both the oil cooler baffle and the baffle it attaches to, rivet in some angle, rivet some .063 onto that and re-drill the connecting holes, effectively moving the oil cooler back 1/4", but I'm not sure that will do the trick on a vibrating engine. And, it's a major pain in the neck since it means ordering a bunch of new parts.

Building an airplane is fun.

Update 9:21 p.m. 4/18/11 - On the advice of both Mahlon Russell at Mattituck Teledyne and Ken Scott at Van's, I drill out the lower nutplate and covered the hole and will go with two bolts on the right side. 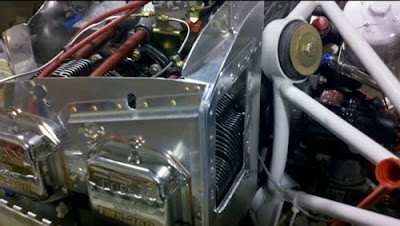 The Van's instructions with the baffle kit are very contradictory here, so I'll pass this along for people who haven't go this way before.

The main problem in this location is the pre-punched parts that come with the Van's baffle kit and the optional oil cooler doubler. The doubler is prepunched and has three holes for the bolts on the right side. OP-27, the drawing, shows only two.

If you do as I did -- take Van's advice and wait to do the oil cooler brace until the baffling is done -- you'll likely end up in trouble, at least if you do the oil cooler cutout and drill for the doubler. You'll have to drill out the top row of doubler rivets because the brace's holes won't line up with them. The brace can only go in one way, but the location of the oil cooler could be any number of places.

You'll also want to leave the most-aft rivet hole unriveted on the horizontal angle/stiffener on the #4 cylinder baffle because if you rivet this, you'll find it hard to fit the brace for final drilling.

Also if you use a .125 angle to beef up the corner, you'll probably have to abandon one of the holes in the doubler since it will interfere with the angle.
Posted by Bob Collins at 7:45 AM 1 comment: