A lot of RV airplane projects that aren't nearly as far along as mine have had their first flights, but I'm not ready to fly mine quite yet. I decided some time ago that I would complete the plane as far as possible before its flight test, even if some of the parts I'm working on will be removed for first flight. 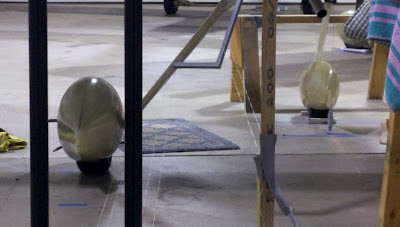 The fairings, which will not be installed for first flight, are usually left to the "I'll get around to it stage" of experimental aircraft projects. They're needed to provide a smoother air flow over the wheels and gear legs and increase speed by 5-10 knots, a helpful thing when you consider the current price of a gallon of 100LL fuel at Fleming Field (KSGS) is currently $5.19.

But the process of fitting them properly is painstakingly slow. By this point in the construction process, however, if you haven't learned patience, you probably shouldn't be building.

My pal, Chris Knauf, was good enough to do some of the construction in the gear leg fairings and he did a great job getting them trimmed and the hinges installed. All that's left to do is fit them properly.

A misfitting fairing can act like a rudder or aileron and change the direction the airplane wants to fly from straight-and-true to didn't-we-just-fly-over-here?

My job this week has been getting those fairings fitted properly. The right-side leg fairing fit pretty well-- a very minor twist that I can take care of easy enough.

Last night, I set the left-side fairing up. The process for this is pretty funky. You mark the centerline of the fuselage, then pick three points on the gear-leg fairing and make an "extended centerline" back to a point on the horizontal stabilizer. I'm using an advanced aviation tool to provide the marking of that point from the tail to the floor -- a broomstick; three actually. 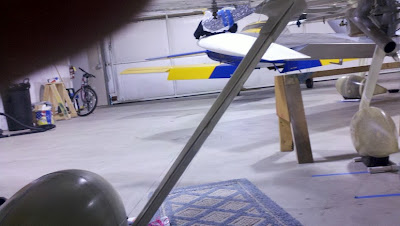 The distance between the center of the aft end of the fairing and each piece of string should be the same, indicating that the fairing is perfectly centered in the airstream with regard to the centerline of the fuselage.

On this particular fairing, I adjusted the bottom of the fairing to make that distance about 15/32". The mark halfway up the fairing was a little more off, and the distance on one side of the top mark was about 14/32" and on the other side was about 27/32". This, you may have surmised is the dreaded "twisted fairing."

There's no real way to work this out because the fairing is only clamped at the very top. There's nothing -- without an intersection fairing -- to hold the bottom from moving in order to twist the top into position.

The solution? I don't know, but I assume I'm not the first one to experience this problem. I'll begin researching it and eventually solve the problem and include it in an article I'm writing for the RV Builder's Hotline.

I just need a little more patience.
Posted by Bob Collins at 9:26 AM 1 comment:

Outside of my office window in Saint Paul, Minnesota, there's a lot of construction going on for light-rail coming from Minneapolis.

But all I see is something that's got me thinking Oshkosh (AirVenture). That's the way it is around this time of the year for us EAAers. 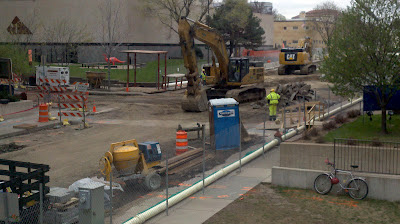 Mystery of the unbalanced elevator

As I near the end of the RV-7A project, it seems as though the mysteries grow a bit deeper.

Here's one I had today:

A few weeks ago, when Tom Berge and Doug Weiler came by to do the pre-inspection inspection, they pointed out the unbalanced elevators, which have lead counterweights in them so that they default to level with the horizontal stabilizer.

I, of course, had noticed this too and it was a bit puzzling since long ago I put the horizontal stabilizer on the workbench and attached the elevators and made sure they balanced perfectly. But, as you can see, now they don't. 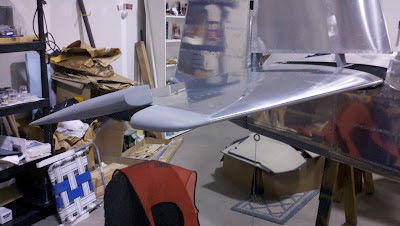 We kind of figured that because the lead counterweight wasn't fully mounted forward on the "counterbalance arms" on the right elevator, that this was the problem. So I ordered a 25 pound bag of lead shot and planned to mix up an epoxy slurry to fill in the gap, adding weight to make it balance perfectly.

Then I unbolted the elevators from each other and from the pushrod to the elevator bellcrank (which goes forward to the control sticks, which, by the way, are all perfectly aligned). 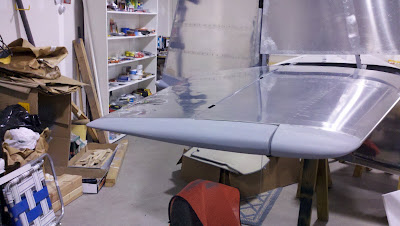 It balances perfectly, so that's not our problem.

Over on the left side, we see the offending elevator. 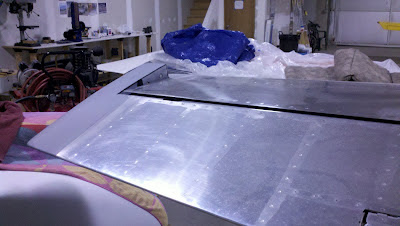 But that elevator, too, had been balanced on the workbench. So we figure it has to be the very thick and rigid trim cable. I'm one of the few people building an RV, I think, that didn't use the optional electric motor trim. But I installed it per the plans. It attaches at the bottom of the elevator after snaking its way from the tail, into the horizontal stabilizer and out to the elevator in an "S" pattern. I don't have an image of it but it's connected to the trim tab, which hangs on the elevator.

If you enlarge this image, you can see down the forward end of the elevator where the cable exits the horizontal stablizer and goes out through the elevator. There's no play in the cable because it's clamped in the fuselage. 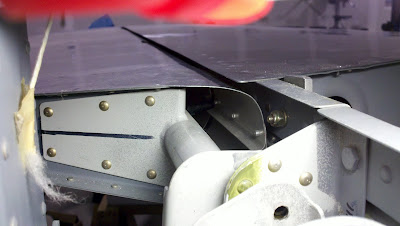 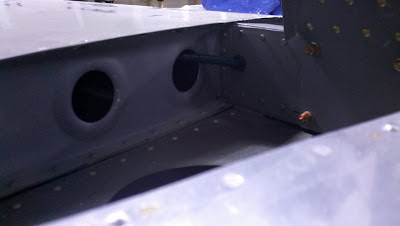 And down into the fuselage. Note the adel clamp to prevent chafing and movement. 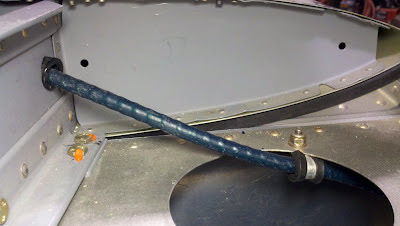 Inside that green shroud is the small cable which control the trim tab. We checked it at both extreme settings to see if that also changed the balance, and it did not.

Everything here, as near as we can tell, is per the plans of the aircraft, and yet it overrides the proper balance of the elevators. We're writing to Van's Aircraft support to see what we should do.

I haven't pulled the cable off the stabilizer yet to see what difference that would make because to fully know, I'd have to drill rivets out of the "inspection panel" on the bottom of the elevator and pull the cable forward. It's a real pain in the neck to do that and, even more so, to put it back.

There's one possibility that I haven't checked, it's that I didn't leave enough cable inside the horizontal stabilizer, and with it clamped on the turtle deck of the fuselage, perhaps it's "pulling" on the trim tab connection a little bit, forcing the whole operation down. It's a shot in the dark, but perhaps loosening that Adel clamp and pushing more cable from the fuselage into the HS to see if it pushes the elevators back into position would be a good start to solving the mystery.

By the way, here's another reason why keeping a good builder log is important. I scrolled back through it to be sure that I had the trim tab on the left elevator when I balanced everything originally, and that it was balanced. 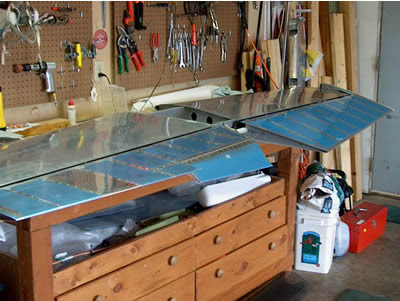 One last piece of trivia: While doing this yesterday, I passed 2,900 hours of work on the project.

Update 3/5/12 9:16 a.m. I messed around with the amount of slack in the HS to no significant difference.
Posted by Bob Collins at 3:26 PM No comments: