How planes land at wrong airports

(Cross posted from the day job)

A few years ago, I took an MPR News website producer for a ride in an airplane to show him his colleague's outstanding airmanship.

This is our approach to the airport in South St. Paul at the time. As we approach the Wakota Bridge, the speed is good, the engine is performing normally, seat belts secured, and it looks like this will be an uneventful landing. There's just one slight problem... 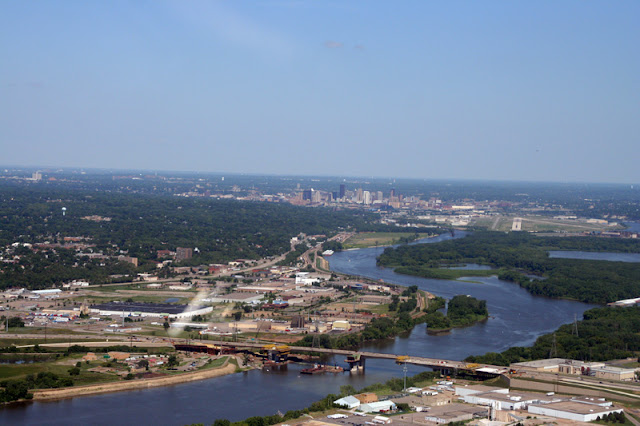 That's not the airport in South St. Paul. That's the downtown Saint Paul airport five miles away. The actual airport -- the runways point in roughly the same direction as most runways in Minnesota do -- is just off our left wing. I had, obviously, mistaken the two airports.

It happens, although usually not with a 747 cargo jet, like the one that landed by mistake at Wichita's Jabara Airport last night. It was supposed to land at McConnell Air Force Base, just a few miles away. The runways face the same direction. Stop me if you've heard this story before.

Here's the sectional map of Wichita that pilots refer to:

The goal of a flight crew is to match -- in the dark -- the lights below (on the map, the yellow indicates the pattern of the lights of Wichita) and the flickering lights of a runway (which can be extremely difficult to pick out when you're flying at night) and select the right one. They selected incorrectly, obviously.

There's no tower at the airport they landed at so there was no one to ask for permission to land and no one to say "you're at the wrong airport."

Sure, there are instruments that the pilots could've used -- and probably even an autopilot -- to land the jet at the right airport, but sometimes pilots like to fly the old fashioned way: by themselves. And, afterall, wasn't the news just talking about the problem of pilots being too dependent on computers?

There's not much you can do after landing at the wrong airport but say "whoops" and check the job listings.

The early news stories made a bigger deal out of the "problem" of getting the jet out. CBS, for example, said the plane was stranded because the runway is too short:

A Dreamlifter is supposed to need a runway 9,199 feet long to take off at maximum takeoff weight, and 7,000 feet to land at maximum landing weight. The runway at Jabara is 6,101 feet long.

That's an easy one to solve. Don't be at maximum takeoff weight. Take everything out (we don't even know if was carrying anything), point the thing in the right direction, and takeoff. They might have already done it by the time you read this.

The incident is similar to one last year when an Air Force cargo plane landed near Tampa, at a small airport half the size of the one in Wichita.

It took a few days to strip the plane of much of its weight.

"There's no way" they'll get the plane off the ground again, the person who took the video said.


Planes are built to fly; they don't know they're in the wrong spot.

Because I've discovered this last-ditch procedure that the FAA might -- might -- look favorably upon, I won't be selling the plane in the next few months; not until I find out whether this works (the procedure is scheduled on 12/4) and the FAA gives me a special issuance. It would be insane not to wait to see if it pays off.

I mentioned that last night to a really nice gentleman who called from Des Moines and has been looking at RVs. I mentioned the situation but said I'm still showing the plane because it might have to go. That didn't disappoint him at all and I'm hoping he can fly up to see it in the not-too-distant future. Having the plane go to a good home, if it has to go, is very important to me and you can tell a lot about a fellow-aviator in a hurry. I like him and wouldn't have a problem handing off the plane to him.

You can also tell the other kind of potential buyers in a hurry too and I'm realizing that I need a place to collect their stories, so I might as well do so here.

There are people who just want something for nothing. Granted, I'm asking a lot for the plane, but it's an airplane, a great airplane. An affordable airplane and I'll get pretty close to what I'm asking or we'll negotiate a lower price. It's worth pointing out that the plane is going into the paint shop at April 15 and that when it's done, the price won't go up. That's just the way I roll.

The first conversation you have with a buyer shouldn't be about how much you'll pay, although it does help to weed out the people you'd never want to sell your plane to.

The full listing for the plane is here. Unfortunately, Trade A Plane doesn't let you put URLs in your print ads, I guess. The print version came out this week.

There's not a lot of information there, you may have noticed, so a logical first contact with a seller might include the phrase, "tell me more."

The e-mail I got yesterday didn't bother going there:

It was a pretty short discussion: 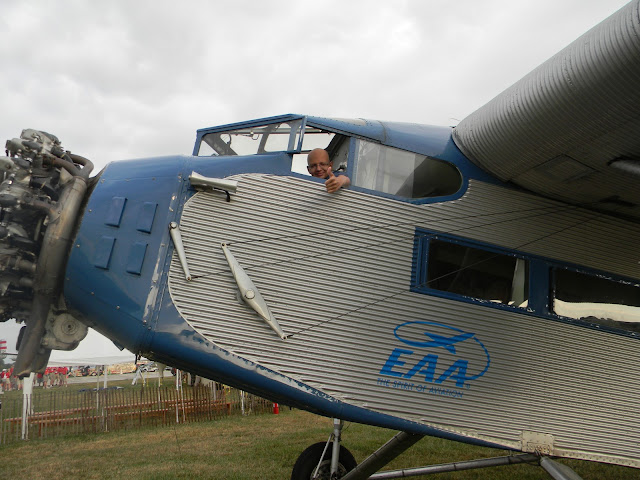 We were all enriched last week with the story of Bat Kid, the five-year-old who beat cancer and wanted to be a superhero. So San Francisco turned out last Friday to make Bat Kid a superhero. Nice story. If only they all ended that way.

Alex Cuellar of Colorado dreamed of becoming a pilot; he mowed lawns to raise money for a ride at the local airport. But then he was diagnosed with a rare brain tumor. He didn't lose his love of flying and while visiting a man who was building his own plane, he mentioned he'd like to visit Oshkosh someday, the largest gathering of pilots and planes in the world. The airplane builder put out a call for help and within a few weeks had raised enough money to take him and his father to Oshkosh.

He sent his Van's Air Force friends this note after the week-long endeavor:

Going to Oshkosh was a lot of fun; I sat in Johnny Depp's seat on the Tri-motor, got to fly in the one of a kind B-29, saw George Lucas with the Tuskeegee Airmen, and got see so many great Airplanes. The coolest part of the trip was the B-29 ride, because it had such a great view from the gunners position on the top and in the back, and you could feel the history of such an aircraft. It was the type of plane that is terrifying and peacemaking at the same time.

You all made this trip so Amazing and you will forever be in my heart.

I was hosting a daily talk show in Oshkosh and pulled him, his dad, and two RV pals who organized the effort in for a chat.

On Saturday, a memorial service was held for Alex; he died on November 9. A group of Denver-area pilots organized a fly-by in the missing man formation in the young man's honor.

Although we're taught that the decision to 'go around' during a landing as a matter of basic flight training, somewhere along the line it is embedded in our consciousness that this is a sign of failure: You blew the landing. Because we are human -- and quite often, I surmise, because we are (mostly) men, we don't want to "go around" and acknowledge our failure any more than we want to pull over and ask directions.

But our fellow pilots -- and us if we're not careful -- are dying unnecessarily because of this.

This morning, the NTSB released the report on a Cirrus crash last month in Illinois. It's only the preliminary information, but see if you can determine where the fate was sealed:

On September 25, 2013, about 1715 central daylight time, a Cirrus SR20 airplane, N406DC, impacted terrain after executing a go-around near Bolingbrook’s Clow International Airport, (1C5), Bolingbrook, Illinois. The pilot and one passenger were fatally injured. The airplane was destroyed. The airplane was registered to GDK International LLC and operated by a private individual under the provisions of 14 Code of Federal Regulations Part 91 as a personal flight. Visual meteorological conditions prevailed for the flight, which operated without a flight plan. The flight originated from Georgetown Scott County Airport (27K), Georgetown, Kentucky about 1500 and was destined for 1C5.

The airplane was captured on 1C5 airport surveillance cameras while attempting to land. A review of the video showed that the airplane touched down multiple times about half way down the runway. The airplane was observed making a left turn after takeoff, descending, and then proceeding out of camera view.

Witnesses reported seeing the airplane depart the runway and make a left turn at a low altitude. The airplane continued to descend, struck a tree and a light pole before impacting a parking lot and sidewalk. A post impact fire ensued and consumed most of the airplane.

During the on-scene examination investigators confirmed flight control continuity and that the flaps were in the retracted position. The Cirrus Airframe Parachute System (CAPS) rocket and parachute were found in the main wreckage. The position of the CAPS activation handle could not be verified due to thermal damage. The parachute was found in a packed state and received thermal damage. The CAPS activation cable was examined and no stretching was found.

Posted by Bob Collins at 9:29 AM No comments:

They were so young

Chris Henry at EAA has spent this year reuniting old-timers with a B-17. If you follow him on Facebook, you've perhaps seen some of the individual stories brought to life by a ride on Aluminum Overcast.

Today he uploaded this.