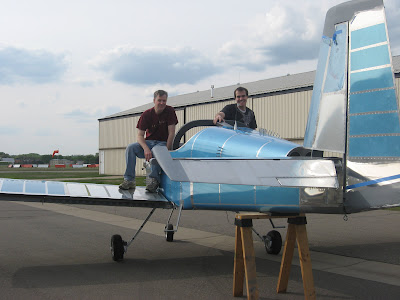 This has been a pay-as-you-go project with the exception of the engine, but I now need to pay down the debt on it, and sock some money away for anticipated medical bills that continue to increase in the family at a particularly alarming rate.

I put the kit up for sale years ago -- around the time I was working on the wings -- but I pressed on in the hope I could get it done, increase its value, and sell it as a flying airplane, getting my investment into it back. That no longer is an option.

This is what I call a "working man's" airplane. It's not a show plane by any stretch of the imagination. But I believe it's well built and its progress has certainly been well documented.

Here are the particulars on the plane, which is very much built to plans (update 10/14/11 - updated to reflect recent work):

WHAT NEEDS TO BE DONE

- I've started installing the fuel lines but haven't finished.
- The engine monitor connections
- Oil lines
- I've started on the baffle kit but I'm only on page 4. Done.
- I have an oil cooler but I'm not sure it's compatible Oil cooler fit but not yet mounted.
- The cowling is fitted and drilled but I haven't done the oil door or done the cosmetic work. Pinholes filled. Ready for primer.
- The wing tips need to be installed. The wires for the Whelen strobes are already run and panel connections made.
- Wheel pants and leg fairings and empennage fairing not completed.
- Soundproofing of the firewall (I've made rough templates but all the conflicting information on VAF has made me wait)
- Filtered airbox mods and installation for vertical updraft (a blank .063 bracket is already cut, in order to move it slightly to the right)

There are no used parts anywhere on the airplane.

Please, no tire kickers or people who want to look at it just because you think you might someday want to build an airplane. I don't have that kind of time to waste.

(Want to help me? Please print out this flyer and post at your FBO)

Update 12:34 p.m. Aug. 30 - It's official! My wife has lost her job and, yes, the plane is still for sale. I've actually put another 250 hours of work into it since this was posted, so my original estimate of how much was left to do was off by a few hundred hours. Now, there really is not much left to do and it's about ready for an engine start. The price is the same but once the engine starts, it jumps to $75,000 and once it's got an airworthiness certificate and its test period is flown off, it goes to $80,000.
Posted by Bob Collins at 12:27 PM 4 comments: