That time I almost killed myself 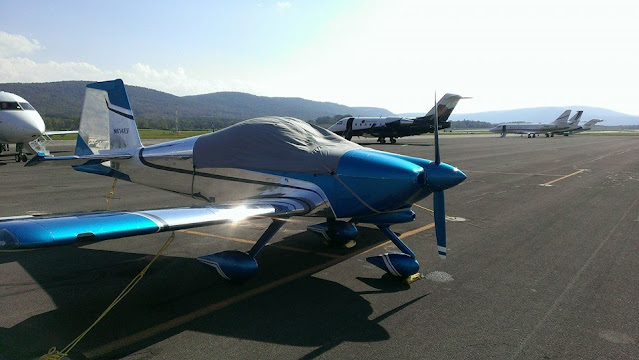 From the Never Again file.

It was six years ago today.

This was the most challenging cross country flight I made. I took off from Fitchburg, Mass., my hometown, when the ceilings were about 2000, knowing there was a chance for weather along the way. I ran into low overcast in Gardner, a few miles away, but found a hole to go up and above the clouds where it was sunny.

I could've stayed up there for 4 or 5 hours. I had full fuel and things were running nicely.

But I had this plan that if things got dicey, I'd land in Pittsfield. And then it became a security blanket because, there I was, on top of the clouds. What if there's no end to the clouds and, say, doesn't it look ahead like those clouds are taller? There are no shortage of dumb mistakes in this story. I wanted to call a Flight Service Station to get a quick read of clouds, but I couldn't find the frequency. Was I in Boston center's area, Albany's, Bradley's (Hartford). I could've asked for a little help, but I didn't. Guy thing. So I decided to land in Pittsfield, which, before I took off, was reporting broken clouds. But then I checked as I flew along near Northampton. Overcast at 3,000. Oh oh.

For reasons that only a psychologist could explain, I pressed on to Pittsfield. Having worked and lived there, I knew there was a ski area next door. How high was that hill? I decided I would orbit over the airport and circle down. Through the clouds. I was at 5,000 feet.

As I circled, I noticed my GPS, which had been providing data to my autopilot (which I'd turned off), was still directing my to my intended first stop - Elmira. Again, for unexplained reasons, I thought this would be a good time to fix the GPS.

The plane's altimeter kept going down and the speed kept going up, then the altimeter went up and the speed went down. I was close to uncontrolled flight and even though I knew what was happening, I just couldn't get ahead of the airplane.

I was thinking about what the people would say about my demise when I broke out over the airport.

Then I heard the radio. It was a guy on an instrument approach to the airport. I hadn't really considered the possibility that there'd be someone else out there.

I quickly headed out to Onota Lake and circled, until I could calm down. I landed, took a break and eventually took off again when the clouds moved away. Five miles west of Pittsfield, the clouds disappeared. I knew another front was coming so I landed in Elmira, above. There was a 26 knot crosswind. EAsily handled. I parked amid the corporate jets of PGA golfers as there was a tournament in the area.

I waited for a couple of hours for the front to arrive and see how quickly it was moving, and then gave up, and got a motel for the night. A half hour later, the rain was so heavy I couldn't see across the street.

The next morning -- a work day so I was blogging -- it was still scuzzy, but legal. So, I took off and followed a highway through the wilderness of NW Pennsulvania, until the highway ran out. Then I followed a river.

It was actually beautiful being low over the rolling hills and occasional fields.

Around Youngstown, Ohio, things cleared out.

Oh it gets worse. The day before I left South St. Paul, Minn., for Massachusetts, I'd attended an AOPA Air Safety Foundation seminar roadshow. The topic: How not to make VFR into IMC mistakes.
Posted by Bob Collins at 10:25 AM