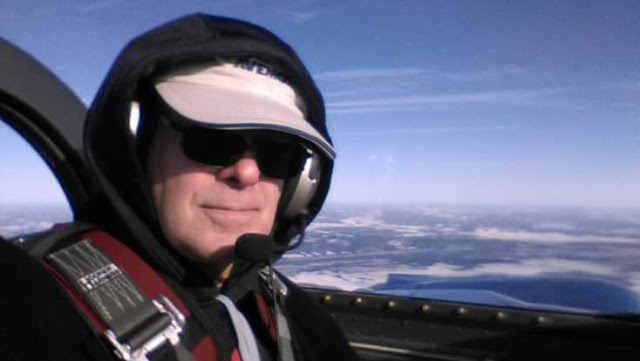 More than a month after agreeing to selling ye olde RV-7A -- N614EF -- I finally saw an opening to ferry it over to its new owner, Chris Moseley of Grand Rapids, MI.

It wasn't particularly emotional because I've had a month to get over it, and I was happy to be done with the frustration of trying to find a period where the lake-effect snow of Michigan, and the regular old sucky winter of Minnesota would ease enough ferry it.

It was -12 in Minnesota when I left yesterday morning; I'd never flown the RV in that sort of weather, so it was fun "expanding the envelope" a bit. I was a walking sleeping bag when I finally strapped myself in and launched.

I circled the field a few times, prepared to return if I heard anything resembling a stumble (Reiff preheater had the oil temp at 109 when I started her. Great product!).

As usual, I picked up flight following from Mpls but noticed something. I'm pretty much deaf now but the controllers still seemed garbled; the engine seemed louder.

It was awhile before I realized, the batteries in my Zulu 2 were dying. I could get the ANR to work by turning it back on, but it wouldn't last long. So after being handed off to Mpls Center, then Chicago, then Rockford, I'd turn it on when I heard my N number called.

Seeing a "heavy" take off from Rockford beneath me was awesome.

The cold was not . -18 at altitude. I broke out the handwarmers when the fingers started tingling after Rockford cut me loose, not even offering the frequency to try to negotiate with Chicago approach.

No matter, I wouldn't have been able to understand them anyway.

I headed for my usual turn at Joliet, a steady stream of Southwest 737s in front of me. I descended to 3500.

The single muff heater in the RV was doing its part, which surprised me, but I needed to get some batteries, so I landed in Valpairaiso, borrowed the crew car, and headed to WalMart, while they topped off the tanks. Can't deliver empty fuel tanks to a new owner.

That also gave me time to come up with a strategy for getting through the snow lines I could see to the north.

I launched out of KVPZ and headed southeast of South Bend, which was reporting IFR, because Goshen was reporting VFR and, indeed, they were in the sunshine.

It was just a matter of hop-scotching from one airport to another based on their ATIS broadcasts, swinging east of Battle Creek (the farther I could get from the lake, the better).

There were only a few moments when visibility was quite poor but I realized the construction of these bands of light snow and there was blue sky above.

I contacted Grand Rapids approach 20 miles out; I was almost there.

"The field just went IFR", they said. So I circled. And circled, and finally just landed at 9D9, which was hard to find since it was covered with white. 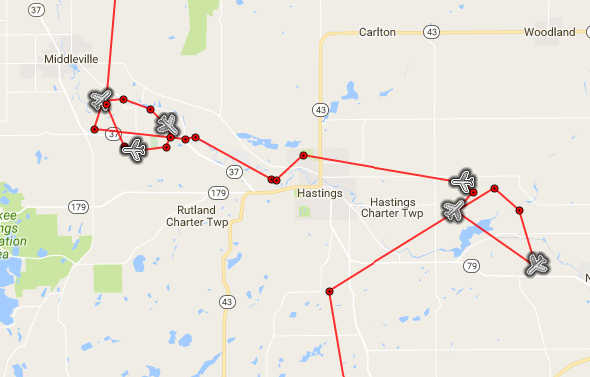 I found the nice little terminal after wading through four foot high drifts. "I can sleep here tonight and just start the plane every hour," I thought. 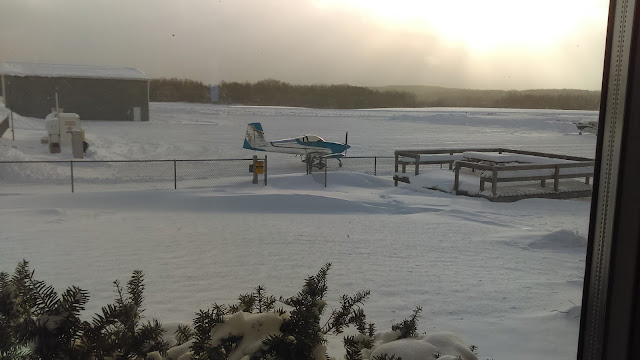 But Chris called and said the conditions looked good at the field. So I launched again.

I saw an opening to punch through the squall and found the field (it's hard to find airports when there's snow all over the place) and landed...and felt the plane pulling to the right. More rudder...rudder...rudder! And the plane pulled to the right so more. I could feel it skidding but by the time I thought, I'm going to end up in the snowbank, I was slow enough to coax her back.

The closing was uneventful, I grabbed a Southwest flight (A2 in the Southwest queue at Grand Rapids, A1 at Midway. With drink tickets!!!), and was hope by 11 p.m.

It was the perfect last flight.

Here's the final remembrance of N614EF I wrote for my day job.