The dream of infinite flight

Because I was doing a daily talk show for EAA Radio, I didn't write the usual Oshkosh Diary this year; doing so would've demanded too much time and certainly more bandwidth than EAA seems capable of providing at Oshkosh.

Over the next few weeks, and as some of the archived audio comes online, I'll be writing about some of the people I met over on my day-job's blog with cross-posting here.

Among the more fascinating individuals, however, was the person I met on Saturday.

If electric-powered flight is ever going to be a reality, it's going to take people like Chip Yates, who might've been close to blowing himself up earlier this month when the warning lights were flashing on his battery-powered airplane telling him to "stop." Instead, he twisted a knob a little more and broke the 200 mph barrier.

Yates had just started flight lessons in May, he told me on Saturday. He got his pilot's license in June. He had flown the airplane that broke the record only once -- the day before the record-setting flight. He intends to fly across the Atlantic on batteries, as soon as he conquers the next frontier -- air-to-air battery refueling. I was explaining the concept to him here... 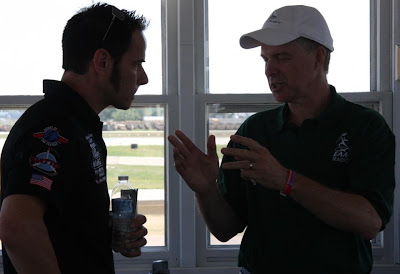 You're right; I'm lying. Chip is 10 tons of brilliance and he sent me home from Oshkosh with a renewed passion for pushing the envelope.