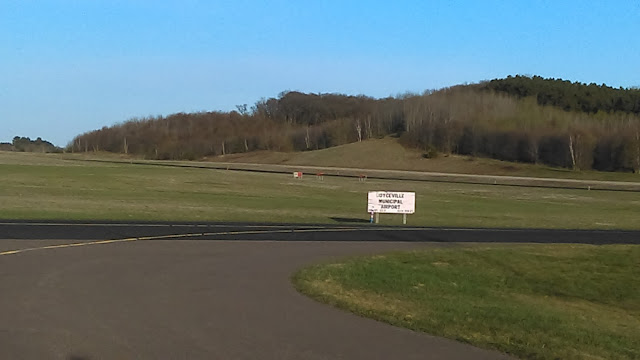 I think more than anything else, the best part about flying is picking out a rural airport on the sectional map, and then flying there just to see who's there. So this evening I flew to Boyceville, WI., (3T3) about 45 air miles from South St. Paul. It was a beautiful evening for a flight, and I picked up Mpls Approach on the way to help navigate around parachutists in Baldwin.

And, surprise, there was a plane in the pattern at this airport with a postage stamp-size-wide runway. A man was giving his grandson rides in a Cessna 150.

There's no taxiway there so he said he'd go ahead and land. Originally he was going to leave the pattern and let me in, which is typical Wisconsin small-airport hospitality, I've found. But I waved him on in and he landed then pulled off into the grass and invited me to come on down. He said later that he wanted to sit with his grandson and watch me land.

I landed and then we both turned and back-taxied to the hangar area where I got out to stretch my legs.

Greg was his name and he really liked my airplane.

He showed me his airplane, which was a doll, too, and pointed out the tires, which showed no tread. 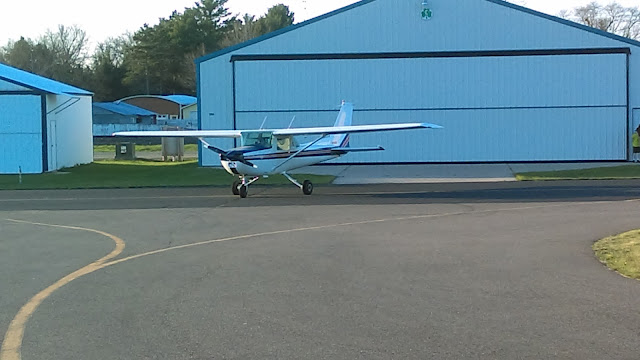 "I flew it all last summer," he said. "I teach and I had a young man from Alaska here wanting to earn as many ratings as he could."

The student earned his private pilot license, went back to Alaska (Wasilla, for the record) and is a checkride away from having his instrument rating.

He said he bought his plane from his son, who works for Compass Airlines. I said that's a well-worn route to the major airlines and told him about several friends who've gone that way, as if I was telling him something he didn't already know.

"Want to see my last flight" and he pulled out his iPhone and showed me a picture of a globe with a big line. He had flown a few days ago from Detroit to Shanghai on a route that took him directly over the North Pole.

He showed me his pictures of the North Pole ice sheet and told me about flying that route, on which his only emergency runway would've been Norway, which you wouldn't think would be sort of on the way to Shanghai by way of the North Pole, but then again we think of the world in up, down, left, right directions. 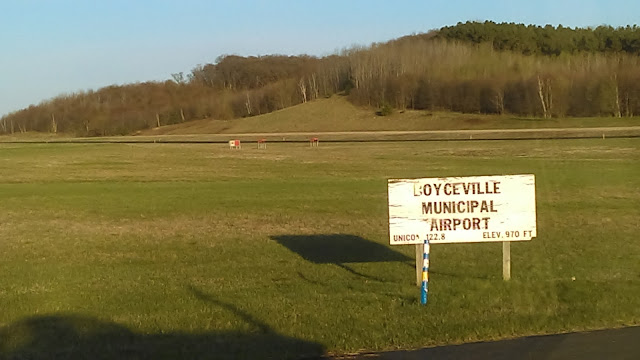 He said he was surprised to find that enroute and very near the exact North Pole, there's a base of some sort. "I think it's the Brits," he guessed.

"Could you land there?" I asked, wondering just how long a runway has to be to handle a 747.

He pointed out something else in the photos he took. From the vantage point of the front seat of a 747, he saw the curvature of the earth.

"Imagine how few who've ever walked this planet have seen any of this?" I said, repeating what my RV flying pal, Brad, had said to me as we climbed above some scattered clouds on the way home from Oshkosh a few years ago.

I've been talking to people I didn't know for years as part of my day job (I found "Radar O'Reilly" in a Denver McDonald's some years ago) and it never disappoints me.

The conversation was fascinating and we made plans to get together at some point this summer so he could also enjoy the view from an RV-7A. I've never flown a 747, but he's never flown an RV-7A, he said.

As for the grandson, he was unimpressed, refusing all offers to sit in my plane, or even look at it.

"I like my grandfather's plane better," he said. Seven-year-olds don't yet realize yet that an airplane can't sense betrayal.

I walked back to the spurned machine for the ride into a setting sun.

"Next time you come," the kid said, "I'm still not going to sit in your plane."

"Fair enough, kid," I thought to myself. "You can never go wrong with grandpa anyway."
Posted by Bob Collins at 10:18 AM