In a week in which the value and future of EAA with regard to homebuilders has been rightly questioned, I was reminded today -- as if I needed to be -- that RV builder groups are much more valuable for people building airplanes than an other source of advice.

Fortunately for me, two of the most knowledgeable RV builders on the planet live in the Twin Cities and, even more fortunately for me, think nothing of giving up three hours on a Sunday afternoon to go over my RV-7A project before the FAA D.A.R. (likely, Tim Mahoney, another RV builder who knows these guys well) takes a crack at it.

Doug Weiler has headed the Twin Cities RV Builders Group since at least the time when I thought an RV came on four wheels. He and Tom Berge showed up at the hangar today, Doug announcing that the "guys who destroy dreams" had arrived.

By nature, I assume I've done stuff wrong, so I'm always a little skittish about having people look at my work too closely. But when I was building, I constantly heard Tom's voice in my ear. Years ago, I did an interview with him for the RV Builder's Hotline. So I knew -- generally -- what he'd be looking for.

He's done so many inspections, he now has a form to check every little thing. He crawls into places that make me hurt just thinking about it. Nothing escapes his notice. When he called out a problem, I wrote it down on the paper covering my workbench. See? (click here for the large image) 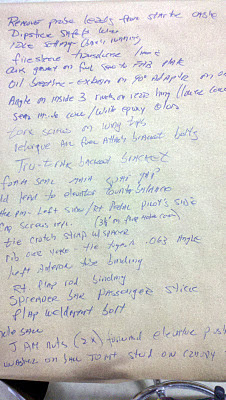 The biggest problem he found were the jam nuts not tight on the forward elevator pushrod, some loose bolts on the fuel tank attach, and the lack of a backout bracket on the TruTrak wing leveler (they were introduced well after I'd bought and installed mine). He had great ideas.

Tom even found a missing cotter pin on the left nut on the right pedal of the rudder/brake pedal on the pilot's side.

One more tip: For an RV-7A bottom cowl rear hinges, a piece of .063 angle should be riveted across the three most inboard rivets of the hinge. Otherwise, Tom said, the "eyes" of these hinges tend to break.

One very interesting piece of advice: Tom suggested disconnecting the aileron trim before the first flight. Otherwise, he said, it'll be hard to detect a heavy wing.
Then, once fixed ("it's easy to fix a heavy wing," he says), it can be reconnected.

It'll take me a few weeks to work my way through all of these things, but I'm not in a hurry.

And when Tim Mahoney takes a look at this bird for the actual inspection, I'm betting when he finds out Doug and Tom have already given it the once-over, and the appropriate items have been fixed, that'll make his job, and my day, a lot easier.

Here are most of the specific items:


1) Move oil breather hose back to the way I had it before VAF told me I should change it.
2) Separate engine probe wire bundle from starter cable
3) Safety wire the dipstick assembly better
4)Set engine idle to just above stall (haven't done any tinkering on actual engine operation)
5)Firesleeve the oil and fuel lines to the transducers
6) Use a cork, rather than a typical paper, gasket between the fuel servo and the FAB plate.
7) Attach .063 angle across the innermost three rivets on the bottom of the cowling aft hinges. The eyes tend to break in that spot.
8) Seal inside of lower cowling with a white epoxy.
9) Torx screws on the wing tips but do not use any stainless on fuel tank attach points.
10) Retorque all fuel tank attach bracket bolts (one or two were loose)
11) Tighten jam nuts on the forward elevator pushrod
12) Disconnect aileron trim before first flight to aid in establishing whether there's a heavy wing.
13) Add backout bracket prevention to TruTrak wing leveler (mine was purchased before TT made these available)
14) Use foam to seal the forward gap between the main wing spar and the fuse. Aileron boots not needed.
15) Silicon seal area around the bottom edge of the rear window.
16) Use a longer flap weldment bolt
17) Change -8 screws in flap housing covers to 3/8" length.
18) The left aileron push tube is binding, rod ends bearings aren't clocked properly. Loosen jam nuts, adjust, tighten.
19) Right flap pushrod also binding for same reason.
20) Crotch strap bracket...use a spacer and bolts to to tie front and back together rather than nutplate through the floor.
21) Top rib cutout under floor (for installing yoke) is cracked.
22) Bolt missing on passenger stick spreader bar
23) Add washers to the ball joint installation for canopy struts
24) Add led to elevator counterbalance
25) Cotter pin missing on left side of right pedal bolt on pilot side
26) All tires to 40 pounds
27) Double check to be sure the forward tank attach bolt wasn't torqued down.
Posted by Bob Collins at 7:07 PM